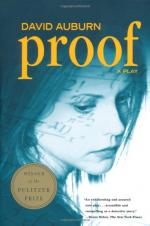 David Auburn
This Study Guide consists of approximately 65 pages of chapter summaries, quotes, character analysis, themes, and more - everything you need to sharpen your knowledge of Proof.

Proof begins at one o'clock in the morning on the porch of a house in Chicago. Catherine sits in a chair, exhausted, and is startled when she realizes her father, Robert, is there. Robert gives her a bottle of champagne and wishes her happy birthday. He wants her to celebrate her birthday with friends, but she says she has none. Robert expresses concern about her, saying that she sleeps until noon, eats junk food, and does not work. He tells her to stop moping. She has potential and there is still time. It transpires that Robert did his best work by the time he was in his mid-twenties. After that, he became mentally ill. Catherine is worried that she will inherit the illness.

It then transpires that Robert died a week before, of heart failure, and the funeral is the next day.

More summaries and resources for teaching or studying Proof.

Proof from Gale. ©2005-2006 Thomson Gale, a part of the Thomson Corporation. All rights reserved.