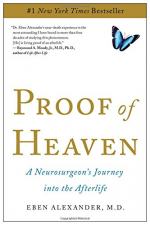 Eben Alexander
This Study Guide consists of approximately 50 pages of chapter summaries, quotes, character analysis, themes, and more - everything you need to sharpen your knowledge of Proof of Heaven.

This detailed literature summary also contains Topics for Discussion on Proof of Heaven by Eben Alexander.

The following version of the book was used to create this study guide: Alexander, Eben. Proof of Heaven: A Neurosurgeon's Journey into the Afterlife. Simon & Schuster, 2012. Amazon Kindle E-Book.

Eben Alexander III is a neurosurgeon who has spent his entire professional life in the scientific and medical worlds. He considered himself secular and was never really a person of faith, relying instead on the quantifiable facts of the physical world to explain the nature of the universe and consciousness. His perspective changes, however, when he is suddenly struck with a life-threatening illness. Suffering from E. coli bacterial meningitis, Alexander is admitted to the hospital where he spends seven days in a coma. His condition is both extremely rare and extremely serious. Throughout the week of his illness, doctors are very concerned that his condition will likely be fatal and that if he survives by some remote chance, he will most likely spend the rest of his life in a vegetative state.

For the majority of the middle of the book, the chapters alternate between descriptions of Alexander's experiences while in the coma and accounts of what was going on at his bedside among his friends and family. Many friends and family members gather to support him including his wife, sons, siblings, friends, and pastor. They alternate turns at his bedside, holding his hand as if to tether him to life. They pray for him and one friend even attempts to contact him through telepathy. There is also a flashback section when Alexander writes about his experiences as an adoptee and meeting his birth family for the first time.

Meanwhile, Alexander is exploring a three-tiered spiritual world in which he is conscious but existing outside of our traditional concepts of time, space, and individual identity. The first tier of the spiritual world is what he calls The Realm of the Earthworm's-Eye View. This is a dark and murky place full of strange faces and sounds where the smell of biological death is present. A light appears above him and his moved upward into what he calls The Gateway: a beautiful lush green countryside. In The Gateway, Alexander meets a girl who imparts on him a central message of unconditional love and connectedness. He then moves upward again into what he calls The Core, when he meets and communes with God, whom he calls Om. In The Core, the central message of love and connectedness is only reinforced. Alexander travels between these three realms until he can no longer do so. At the same time, he begins to become aware of people praying around him. He comes to recognize their faces and to remember that these are people he loves in another realm to whom he must return.

Just as doctors begin to discuss the possibility of ending Alexander's treatment, he makes a miraculous recovery and emerges from the coma with a new awareness and understanding of the spiritual, based on what he experienced in those seven days. Though it takes some time for Alexander to fully recover, he eventually regains all of his memories and mental faculties. This full and total recovery is another miraculous aspect of his story. Now recovered, Alexander's worldview has completely changed. He is now a person of faith who believes in God and the afterlife. Alexander uses his scientific knowledge to research other stories of near-death experiences and analyses his own medical records to get to the bottom of what really happened to him. Ultimately, Alexander concludes that his experiences while in the coma must have been real and not dreams or figments of his imagination because the part of his brain responsible for creating such images and experiences was not working at all while he was ill. As such, he makes the radical conclusion (from a scientific perspective) that consciousness is not created by the physical brain, but exists separately from it and endures after physical death.

Having lived through all these experiences, it is now Alexander's purpose in life to share what he has learned about spirituality, God, the universe, and the afterlife, all while also imparting the central message he learned about the primacy of unconditional love and universal connectedness.

More summaries and resources for teaching or studying Proof of Heaven.