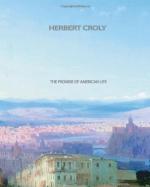 Herbert Croly
This Study Guide consists of approximately 37 pages of chapter summaries, quotes, character analysis, themes, and more - everything you need to sharpen your knowledge of The Promise of American Life.

Croly's book was so successful because it went far beyond merely offering a new political philosophy or a collection of novel policy suggestions. It did both those things, but it also gave vitality and plausibility to that philosophy and those ideas by folding them into a narrative."

Progressive Democracy (1914, new edition published in 1997) is Croly's second major work of progressive thought. In it, Croly builds upon the concepts presented in The Promise of American Life.

Upton Sinclair's The Jungle (1906) is a seminal text that reports the horrible conditions workers faced in meat-packing plants at the start of the twentieth century. It is a staple text for students and historians of the Industrial Revolution and of labor policy.

In Herbert Croly of "The New Republic": The Life and Thought of an American Progressive (1985), David W. Levy provides an in-depth look at...

More summaries and resources for teaching or studying The Promise of American Life.

The Promise of American Life from Gale. ©2005-2006 Thomson Gale, a part of the Thomson Corporation. All rights reserved.