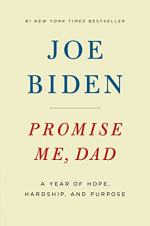 Joe Biden
This Study Guide consists of approximately 46 pages of chapter summaries, quotes, character analysis, themes, and more - everything you need to sharpen your knowledge of Promise Me, Dad.

Meanwhile, the author writes, things were getting worse in Ukraine, with Russian President Putin continuing to break the agreements made with Ukraine’s leaders and coming closer and closer to putting increased military pressure on the country and, by extension, on Europe. The author describes delivering an important speech calling for continued resolve of the West and its allies in facing down the bullying Putin – and then discovering that Beau’s condition was deteriorating.

The author describes being called to a conference with Beau’s medical team and at first being told...

More summaries and resources for teaching or studying Promise Me, Dad.