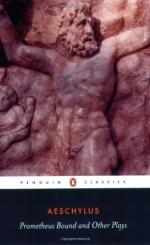 Earth and Sky are the parents of Oceanus and Tethys, who are the parents of the Oceanids. Aeschylus's mythology, which names Prometheus's mother as Earth, makes the Titan uncle to the Oceanids. Like their father Oceanus, they sympathize with Prometheus, but more bravely. Partially out of fear of Zeus, however, they disapprove of Prometheus's behavior, urging him to attempt a reconciliation. Fear of Zeus strikes the Oceanids when they learn of Io's suffering, but still they remain with Prometheus at the end of the play, when he is cast into Tartarus.

As the play opens, Force and Violence accompany Hephestus as he impales Prometheus to a peak in the Caucasus mountains. Force remains blindly obedient to Zeus, showing no pity for the Titan and respecting only Zeus's pure power. Force's attitude is realistic. When Hephestus laments that it was his skill at metallurgy...