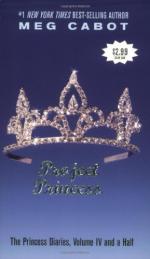 Project Princess was written in 2003 by Meg Cabot. The novel is Volume Four and a Half of The Princess Diaries, a 14-volume series of books for young adults. The series chronicles daily life from the perspective of Mia, a young princess living in modern times.

The four books preceding Project Princess track Mia's transformation from typical ninth-grade student in Greenwich Village to living the life of a princess. Mia's father has revealed that he is the prince of Genovia, a small fictional country in Europe, and now Mia has double-duty living as a typical kid and as a high-profile public figure.

In Volume Four of the Princess Diaries series, Mia finally kisses her friend Lilly's brother, Michael, who has been her crush for a long time. She doubts he wants to be her boyfriend but at the conclusion of the novel, it is clear that he does. Mia has been despondent that she doesn't have a talent, but Michael points out to her that her gift is writing.

This book chronicles a field trip Mia takes with other kids from her school to volunteer for Houses for the Hopeful, an organization that builds houses for people in need. Mia's boyfriend Michael is also on the trip, as are her friends Lilly and Tina.

Mia first has to convince her mother she should be allowed to go. When she finally gets permission, she is thrilled, as this means that she will have some time with her boyfriend to make out without any parents around.

As Mia learns more about the trip- the bugs, the construction tools, and solar shower bags, she starts doubting whether this trip is really for her. Michael convinces Mia it will be a great time for them to spend some alone time.

When the students get to West Virginia, the rough living conditions are not what Mia had in mind. Tents, dew, and port-o-lets are all unfamiliar to Mia and she would rather they stay that way. At the same time, Mia is a good sport about it, recognizing that if she wants to volunteer with Greenpeace one day, she will need to get accustomed to this sort of living.

Mia finds reward in building a house for the Harmeyers, her host family, along with the others in her group. Over a period of time, Mia builds confidence in her ability to contribute to the process in a significant manner. She is also excited for the Harmeyer boys to be getting out of a trailer and into a real house.

When Mia returns to New York, she finds herself far more grateful for having her home than she was before she parted.