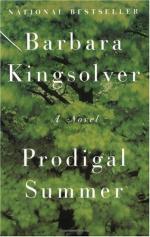 Barbara Kingsolver
This Study Guide consists of approximately 46 pages of chapter summaries, quotes, character analysis, themes, and more - everything you need to sharpen your knowledge of Prodigal Summer.

This detailed literature summary also contains Topics for Discussion and a Free Quiz on Prodigal Summer: A Novel by Barbara Kingsolver.

"Prodigal Summer" is a novel about members of a community in Appalachia, specifically focusing on the lives of Deanna Wolfe, Lusa Landowski, and Garnett Walker. These main characters are introverted and solitary individuals who have unique and strong views about their natural surroundings. Throughout the course of a spring and summer, their lives change drastically and they realize that they, like other creatures, are not solitary. They are a part of a complex web that connects all living beings.

Deanna is given the first chapter, and each of her subsequent chapters are titled "Predators." Her story begins with her life in the Zebulon National Forest as a forest ranger. She has had this career for two years and created the job herself through her college thesis on protecting wildlife, specifically coyotes. Her peaceful solitude is disturbed by the appearance of Eddie Bondo, a hunter/sheep farmer from Wyoming. Although there is a strong attraction between these two characters, their beliefs about protecting species, predators in particular, are vastly different. Much of their dialogue consists of discussions and arguments about the relationship between humans and other wildlife. This theme is repeated in the lives of the other main characters as well. Their story ends with him leaving her as well as the coyotes alone; in a note he says he has met his match. She will never forget him, for she has her memories of his touch as well as the child she is carrying. In her final days on the mountain, she realizes how faulty the belief in solitude is, because all creatures are connected; she is headed back to civilization to live with her father's former girlfriend, Nannie Rawlings, to raise her child.

The second main character mentioned is Lusa, and her chapters are titled "Moth Love." She is an entomologist from Lexington who is lonely in her new home and marriage. She and her husband frequently argue, and she feels like an outsider in his family's home and the community. Soon into her story, Cole is killed in an automobile accident, and she spends the rest of the book dealing with his death, becoming part of his family, and finding her place in this small community in Zebulon County. Cole's life becomes a string of stories to learn more about his life, as well as the history of his entire family. She has become part of this family, when she and the family let their guards down and get to know each other. Also, she falls in love with her dying sister-in-law's children and prepares to adopt them. This adoption gives her a place in this family, and it keeps the family home in the Widener family for another generation.

The third chapter title is "Old Chestnuts" for another main character, Garnett. He is an elderly widow living in solitude in the home in which he had grown up. He spends his days mulling over the difficulties his neighbor, Nannie Rawley, causes him. He grows some produce, as well as his beloved chestnut trees. He believes that pesticides are the only way to protect his crops and trees, which is in complete contrast with Nannie's organic methods. They spend much of Garnett's story bickering over the relationship between man and nature and how to work in harmony with nature. By the end of Garnett's story, they have learned a great deal about one another and have learned to listen to and compromise with each other. They have also found a mutual affection for each other in their old age.

The final chapter is different from all the other chapters. It is from the perspective of the coyote. This coyote travels through the valley and back up the mountain. It hints at the growth of her family and the new families that are arriving.

These characters, like all creatures, are connected. There are several large connections between these characters. Deanna's father is also the father of Nannie Rawley's daughter. Garnett is the grandfather to the children Lusa adopts. Both Deanna and Lusa care about the coyotes living on the mountain, as well as the forest behind the Widener home. There are many other smaller details that attach one character to another, including personality traits, the nature that surrounds them, and the growth that takes place in their lives over the course of two seasons.

More summaries and resources for teaching or studying Prodigal Summer: A Novel.