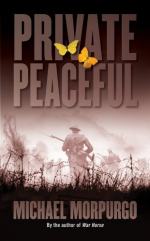 Michael Morpurgo
This Study Guide consists of approximately 30 pages of chapter summaries, quotes, character analysis, themes, and more - everything you need to sharpen your knowledge of Private Peaceful.

This detailed literature summary also contains Topics for Discussion and a Free Quiz on Private Peaceful by Michael Morpurgo.

Alone in a barn in World War I Belgium, Private Thomas Peaceful struggles to remain awake. As far as he is concerned, this might be the last night of his life, and he is determined not to waste it. With only eight hours until six in the morning, Thomas is determined to stay awake and remember his entire seventeen years of life.

Thomas remembers growing up in a rural village in England with his two brothers, Charlie and Big Joe, and his mother. He remembers the profound friendship and love he felt for his brother Charlie and their friend Molly. He remembers the three of them playing together after school and poaching on the Colonel's land.

As the three grow up, they swear to always stay together and vow that as long as they are together, they will always have great luck and happiness. However, as time goes on and Charlie and Molly grow out of their childhood before Thomas does, they begin to grow apart. Thomas falls in love with Molly, but so does his brother Charlie. With Charlie and Molly seeing each other in secret, it is only a matter of time before Thomas finds out.

When the war comes, everything seems to change in their cozy little village. Thomas discovers that Molly and Charlie have been seeing each other behind his back, and Molly will be having Charlie's baby. Charlie and Thomas, both feeling that they have little choice in the matter, join the army to go fight the Germans. While training, Thomas and Charlie decide that the war is not as bad as they have heard. The training feels surreal as if they are only rehearsing for some fake battle that will occur far off in the distance. However, the Peaceful brothers soon learn the truth of the Great War.

German-occupied Belgium teaches Thomas the truth about war, death, destruction, and fear. Thomas remembers the beginning of the war and how without Charlie by his side, he would never have made it to that barn in Belgium. As the night flies by, Thomas remembers all of the horrors of war and he remembers that the abandoned German dugout, where Charlie refuses to obey an order from their sergeant in order to stay with Thomas.

Thomas has tried to remember his whole life in one single night with the knowledge that Death is waiting at six o'clock.

More summaries and resources for teaching or studying Private Peaceful.