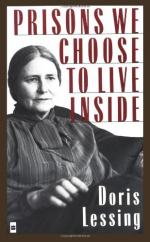 Plot Summary
+Chapters Summary and Analysis
When in the Future They Look Back on Us
You Are Damned, We Are Saved
Switching Off to See Dallas
Group Minds
Laboratories of Social Change
Free Quiz
Characters
Objects/Places
Themes
Style
Quotes
Topics for Discussion
Order our Prisons We Choose to Live Inside Study Guide

Prisons We Choose to Live Inside Summary & Study Guide

Doris Lessing
This Study Guide consists of approximately 21 pages of chapter summaries, quotes, character analysis, themes, and more - everything you need to sharpen your knowledge of Prisons We Choose to Live Inside.

Prisons We Choose to Live Inside Summary & Study Guide Description

Prisons We Choose to Live Inside Summary & Study Guide includes comprehensive information and analysis to help you understand the book. This study guide contains the following sections:

This detailed literature summary also contains Topics for Discussion and a Free Quiz on Prisons We Choose to Live Inside by Doris Lessing.

Prisons We Choose to Live Inside, by Doris Lessing, is based on a series of five lectures given in 1985 by the famed novelist and nonfiction writer at the request of the Canadian Broadcasting Corporation. Lessing, an English citizen born in Persia (now Iran) and raised in Southern Rhodesia (now Zimbabwe), won the Nobel Prize for Literature in 2007, has authored scores of books and often has been acclaimed as one of the great writers of her time. The title of her lectures and the subsequent book, Prisons We Choose to Live Inside, refers to the domination of human beings by the savagery of their past, and how they have the tools to escape this domination in the form of new behavioral information, but have not assimilated or applied that information to make the necessary changes. She means that the madness of war, the destruction of the environment, prejudice, and many other forms of degradation and barbarism can be anticipated and curbed if people were to properly understand and use the relatively new tools of the social or behavioral sciences that are at their command. These disciplines, including psychology, sociology, social psychology, and social anthropology, are breaking new ground in helping us to understand why individuals and groups act as they do, but Lessing decries the fashionable tendency to dismiss such areas of study as the so-called "soft" sciences, because their findings supposedly cannot be measured as readily or rigorously as could those of the more traditional branches of science.

Lessing argues that future generations will be amazed at how much information people of our time have gathered about themselves, while failing to use it to improve their lives. Her first chapter outlines the problem and stresses this pressing need to put the information to practical use. The second chapter investigates the penchant of people not only to attach themselves to beliefs of all kinds, but to throw away reason in favor of blind faith and to vilify everyone who does not share the same belief. Her third chapter deals with the many guises of brainwashing, as a form of torture in war, in religious practices, and in governmental or private enterprise efforts to direct and control the preferences and activities of groups. The fourth chapter is about the difficulties of thinking for oneself when surrounded by others who hold opposing opinions or beliefs, otherwise known as the phenomenon of the group mind. The fifth chapter explores ways to use the data being compiled by the social sciences to engineer meaningful change in the way people think and behave, from the level of the individual to that of the nation. By combining the observations and information in these chapters, Lessing's intent is to expose non-rational thinking, and to show how insights gained from studies in the social sciences could be applied to lift humankind from primitive, ignorance-driven behaviors into a new level of civilized living.

More summaries and resources for teaching or studying Prisons We Choose to Live Inside.

Prisons We Choose to Live Inside from BookRags. (c)2022 BookRags, Inc. All rights reserved.