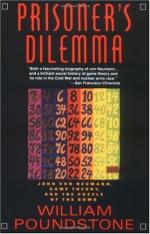 This detailed literature summary also contains Topics for Discussion and a Free Quiz on Prisoner's Dilemma by William Poundstone.

In Prisoner's Dilemma, William Poundstone gives a history of game theory through the eyes of its principal founder, John von Neumann with the cold war and nuclear brinksmanship as the backdrop.

The book begins with a discussion of dilemmas in popular culture and in folklore. A dilemma is a situation with no good answer; something must be given up whichever side you choose. Many thinkers in the 1950s and 1960s saw the nuclear stalemate between the Soviet Union and the United States as a kind of dilemma. During this period, one mathematician, John von Neumann, would give intellectuals and theorists the mathematical tools to understand and to describe the strategic dilemma.

Von Neumann was a mathematician of uncommon ability. Born and raised to a prominent Jewish family in Budapest, from an early age von Neumann showed a keen intellect and interest in problem solving and mathematics. In his twenties, he was recognized as one of the greatest mathematicians in the world. Escaping from the increasingly unstable situation in Germany, von Neumann joined Einstein, Godel, Oppenheimer and others at Princeton's Institute for Advanced Studies. There he worked with his partner, Oskar Morgenstern, to develop a general mathematical theory of two-person, non-cooperative conflicts, or games. Economist, social scientists and policy makers as well as mathematicians would wildly use this game theory.

Von Neumann then went on to work on developing first the atomic bomb and then the hydrogen bomb, helping to create a dangerous situation between the Soviet Union and the United States; a situation where each side sought advantage for themselves at the cost of the other. At the RAND Corporation, a private think tank developed to study interesting questions of national importance, one of von Neumann's colleagues developed a game that seemed to model the situation that the US and the Soviet Union found themselves in, the prisoner's dilemma.

The prisoner's dilemma and several other games led to extensive research in psychology and social science. Many thinkers attempted to find a cooperative "solution" to the prisoner's dilemma, with no success. Some developed a version of game theory to model evolutionary changes in nature. At the University of Michigan, Robert Axelrod tested many different strategies in a prisoner's dilemma tournament. He found that one strategy, tit for tat, could win the tournament and was very stable. This led some to develop theories to explain human cooperation as a kind of tit for tat strategy. Over time, game theory became used in many different contexts, though primarily in social science and economics. Von Neumann never saw the end of the Soviet Union and the cold war that he had worked so hard to win, but his theories live on in the social sciences, biology and mathematics.