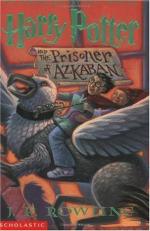 Harry Potter and the Prisoner of Azkaban Overview

J. K. Rowling
This Study Guide consists of approximately 68 pages of chapter summaries, quotes, character analysis, themes, and more - everything you need to sharpen your knowledge of Harry Potter and the Prisoner of Azkaban.

Harry Potter and the Prisoner of Azkaban Summary & Study Guide includes comprehensive information and analysis to help you understand the book. This study guide contains the following sections:

This detailed literature summary also contains Further Study and a Free Quiz on Harry Potter and the Prisoner of Azkaban by J. K. Rowling.

The third novel of Rowling's wizard saga revolves around themes of betrayal and forgiveness. Harry Potter realizes that people and creatures are often not who they appear to be, and those perceptions of friends and enemies are sometimes misleading. This novel's complex plot and themes symbolize teenaged Harry's maturation since the first Harry Potter book and reveal his increased self-confidence and control over his insecurities. In the beginning of the book, public hysteria over the escape of the notorious mass murderer Sirius Black from the wizard prison, Azkaban, results in heightened security at Hogwarts School of Witchcraft and Wizardry. Harry first hears of Black's escape while watching news with the Dursleys. He is upset when Vernon Dursley refuses to sign his permission slip to visit Hogsmeade, the magical village adjacent to Hogwarts that only third year students and older can roam, unless Harry acts appropriately, in Vernon's opinion, when his sister Marge visits. After an emotionally devastating encounter with Aunt Marge, Harry flees from his guardians' home.

Wandering the neighborhood, Harry is afraid that he will be banished from Hogwarts for using magic vengefully against Marge.

He sees an alarming black dog and is rescued by the Knight Bus that deposits him at a boarding house called the Leaky Cauldron where he seeks sanctuary until school begins. While waiting for school to begin, Harry learns that the black dog he saw is a Grim, a death omen. His friends Ron Weasley and Hermione Granger eventually join Harry at the hotel. As the friends prepare to go back to school, Harry overhears Arthur and Molly Weasley discuss their fears that the fugitive Black will murder Harry because of comments that he reportedly muttered while sleeping in prison; they do not realize that Black is actually seeking Harry to protect him from the true culprit, Peter Pettigrew. Harry discovers that twelve years earlier Black was accused of betraying his parents whereabouts to Lord Voldemort thus exposing them to his murderous rage.

Black was also blamed for killing thirteen Muggles with one curse when he was apprehended on a public street. Harry is not concerned, though, because he believes that he will be safe at school where Albus Dumbledore will ensure his security.

At Hogwarts, Harry tries to resume his normal school schedule but is hindered by people's concern for his safety. While he enjoys his classes, Harry continues to endure antagonism from his rival, Draco Malfoy, and suffers excruciating nightmares.

Seeing the Grim on campus, Harry worries about Black pursuing him. Harry falls from his broom, losing his first Quidditch match.

He is frightened when Black breaks into his Gryffindor dormitory room.

Harry is especially appalled by the Dementors, the menacing hooded Azkaban prison guards who linger around campus, figuratively paralyzing Harry physically and emotionally. With the aid of his Invisibility Cloak and the Marauder's Map, given to him by the Weasley twins, Harry explores the subterranean tunnels leading to Hogsmeade where he learns more about the circumstances of his parents' murder and becomes enraged at Black's duplicity. Presented a Firebolt from an anonymous gift giver, Harry is upset when the broomstick is confiscated because Professor McGonagall fears that it is cursed. Harry practices with Lupin to learn how to deflect the Dementors' paralyzing effect on him by focusing on happiness to prevent him from hearing his parents' death shrieks.

Manipulating time, Harry and Hermione intervene to rescue Hagrid's Hippogriff, Buckbeak, from execution in an eerie subplot that parallels the Dementors' vengeful search for Black. At the book's climax in the Shrieking Shack, Harry is confronted by truths and falsehoods, forcing him to react morally instead of emotionally and to be self-sacrificing instead of selfish. He learns the dangers of false accusations and the fleeting nature of freedom, both physical and mental. Although some of his innocence is lost, Harry continues to have faith in himself and his decisions and acknowledges that some of his mentors, especially Dumbledore, are fallible and cannot always protect him.

More summaries and resources for teaching or studying Harry Potter and the Prisoner of Azkaban.

Harry Potter and the Prisoner of Azkaban from BookRags. (c)2022 BookRags, Inc. All rights reserved.