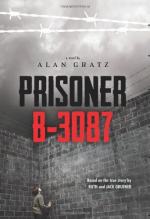 Alan Gratz
This Study Guide consists of approximately 58 pages of chapter summaries, quotes, character analysis, themes, and more - everything you need to sharpen your knowledge of Prisoner B-3087.

Prisoner B-3087 Summary & Study Guide includes comprehensive information and analysis to help you understand the book. This study guide contains the following sections:

This detailed literature summary also contains Quotes and a Free Quiz on Prisoner B-3087 by Alan Gratz.

The following version of this book was used to create the guide: Gratz, Alan. Prisoner B-3087. Apple Books, 2013.

Gratz’s novel is divided into thirty chapters, each grouped in varying number according to setting. The novel opens in Krakow, as a young boy named Yanek and his family experience the beginning of the war and German occupation of Poland. Soon, their neighborhood was encircled by a wall, forming the Krakow ghetto, and they were forced to take in multiple other families to live in their tiny apartment. In this section, the reader sees the gradual progression of policies and practices that strip the Jews of their rights and humanity in a downward spiral toward the gross human rights abuses and genocide that come later in the novel. After years of living in a pigeon coop on the roof of their apartment building, Yanek’s parents were send away and he was left alone. Soon after, he was shipped off to the camps, as well.

The remainder of the novel moves through a quick progression of settings, beginning with Plaszów camp near Krakow, where Yanek was reunited with his uncle but also ushered into the world of forced labor and subhuman treatment by the Nazis. His uncle was killed, and Yanek was soon moved to the Wieliczka salt mines, then to the Trzebinia concentration camp, all within relative proximity to his home in Krakow. From this point, the treatment and conditions in the camps Yanek lived in deteriorated rapidly, as the prisoners were subject to worse and worse abuses and more frequent killings. Many died of starvation or disease in addition to direct murder by Nazi soldiers and even kapo guards, who came from the ranks of the Jews themselves to enforce the brutal conditions on their fellow prisoners. After Trzebinia, Yanek was moved farther and farther afield, leaving the land he knew to be shunted from camp to camp in cattle cars under squalid conditions. He went to Birkenau, barely escaping murder in the gas chambers and crematoria, then to Auschwitz, where he was again forced to work and where he made a friend that was soon murdered before his eyes.

After this, as the war moved closer and closer to Yanek and the Germans seemed to be increasingly on the defensive, he was forced on a death march toward camps closer to the German interior, first to Sachsenhausen camp outside Berlin, then to Bergen-Belsen to the northwest. At Bergen-Belsen, Yanek and the others were given a week’s respite from work in order to regain strength, but after this, the brutality only increased as Yanek was beaten personally by a particularly nasty kapo guard. He did everything he could to be transferred again and was moved to Buchenwald with the best workers of the group, then to Gross-Rosen camp, again by train while bombs dropped by the allies fell all around their carrel car but seemed to miss them. At Gross-Rosen, he was treated particularly brutally, and the camp’s prisoners were eventually forced to march toward the German interior again, this time moving to Dachau camp outside Munich. It is here that Yanek was finally liberated by the American army after a long night of bombing that fortunately spared him. Free at last, he reunited with his only living family—a cousin named Youzek and his wife. Yanek eventually emigrated to the United States, where he began a new life with the memories of all he had endured and all those he had lost staying with him forever.

More summaries and resources for teaching or studying Prisoner B-3087.