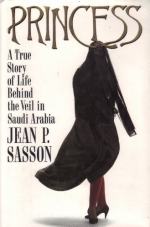 Princess: A True Story of Life Behind the Veil in Saudi Arabia Summary & Study Guide

Jean Sasson
This Study Guide consists of approximately 33 pages of chapter summaries, quotes, character analysis, themes, and more - everything you need to sharpen your knowledge of Princess.

Princess: A True Story of Life Behind the Veil in Saudi Arabia Summary & Study Guide Description

Princess: A True Story of Life Behind the Veil in Saudi Arabia Summary & Study Guide includes comprehensive information and analysis to help you understand the book. This study guide contains the following sections:

This detailed literature summary also contains Topics for Discussion and a Free Quiz on Princess: A True Story of Life Behind the Veil in Saudi Arabia by Jean Sasson.

PRINCESS: A TRUE STORY OF LIFE BEHIND THE VEIL IN SAUDI ARABIA by Jean P. Sasson is a true story based on information given to the writer by a Saudi Arabian princess. Sultana was born the tenth daughter of a prince of Saudi Arabia and grew up in a world of luxury. That luxury was belied, however, by the oppression of women that took place all around her as Sultana grew up. Sultana would suffer some of this oppression herself when she was forced into marriage to a man she barely knew before she was seventeen and when that husband would later tell her he intended to take a second wife because she could no longer give him children. Princess is a non-fiction story of the outrage that is forced upon women throughout Saudi Arabia even today, a story that leaves the reader praying for change before it is too late for the next generation of girls growing up in Saudi Arabia.

Sultana grew up being tortured by her older brother, Ali. Sultana's first memory stems from an incident in which her mother hit her for copying Ali. Other early memories stem from battles she and Ali fought in their attempts to both end up on top. Ali was a spoiled child who often did cruel things to people and animals alike and was never disciplined because he was the only son of their father's first marriage and therefore Father's heir.

When Sultana was entering her teenage years, her sister Sara was forced into marriage. Only three years older than Sultana, Sara dreamed of studying art. However, these dreams died the day she was forced to marry a man more than twice her age and who already had several other wives. Sara was crushed emotionally by this marriage, made worse by the fact that she would not be allowed to see her mother and sisters the first few months of marriage. Before the time limit set by their father was over, Sultana and Mother got word that Sara was in the hospital. When they arrived they learned that Sara had attempted suicide. Sara's husband was a sexual sadist who tortured Sara, leaving her desperate to leave the marriage any way she could. Her mother put her own well being at risk by insisting that Father arrange a divorce for Sara.

In the months after Sara returned to her father's home, Nura, an older sister, arranged for Sara and Sultana to go on a furniture buying trip with her. Ali managed to convince Nura to take him and friend along as well. Enraged by Ali honing in on her trip, Sultana flushed Ali's headdress down the toilet, causing him to break his toe as he attempted to stop her. Later, Sultana took Ali's hidden collection of pornography to the local mosque in order to get him in trouble with the mutawas, the religious people and protect herself from getting in trouble. The ruse worked, but Ali suffered more than Sultana had expected, causing her to regret her actions.

During the trip to Cairo and Italy, Sultana walked in on her brother and his friend raping a small child. This was condoned because the mother of the child sold her to Ali for this very purpose. At the same time, Sultana began to menstruate, bringing her to the age at which all Saudi women must begin wearing a veil and abaaya whenever they are in the presence of a man not of their immediate family. Sultana was excited about this coming of age act but disliked the veil's restrictions.

After returning from their trip, Sultana and her siblings learn that their mother was dying of cancer. Sultana was heartbroken, but grieving for the dead is not accepted in their culture, so she focused on the happy times in her mother's life. Shortly after her death, Sultana's father decided to remarry. Sultana was determined to dislike her new stepmother but discovered she was a scared young woman just like herself. Sultana included her new stepmother in a woman's group she had organized with two friends. However, this proved to be a mistake when the other two members of the group were caught spending time with foreign men. Sultana's father divorced his new wife.

Sultana's father arranged for Sultana to be married. Sultana wanted to meet the man before the wedding and her father surprisingly agreed. Sultana discovered that her father had made a good match and Kareem was a good man. Sultana's marriage was happy until she suffered a bought with breast cancer and became unable to have any more children. Kareem decided to marry a second wife for the purpose of having more children. Sultana could not accept this, so she ran away with their three children. Eventually Kareem agreed to sign a paper promising to never marry another woman as long as Sultana lived.

When Sadam Hussein invaded Kuwait, refugees flooded Saudi Arabia. As a result there was a great deal of chaos. Several women took advantage of this chaos and drove through the city streets, something that is forbidden. Sultana saw this as a sign of change but soon learned that these women were ostracized, including one who was rumored to have been killed. Little had changed and it appeared that little would ever change.

More summaries and resources for teaching or studying Princess: A True Story of Life Behind the Veil in Saudi Arabia.

Princess: A True Story of Life Behind the Veil in Saudi Arabia from BookRags. (c)2022 BookRags, Inc. All rights reserved.