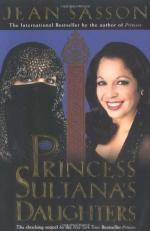 This detailed literature summary also contains Topics for Discussion and a Free Quiz on Princess Sultana's Daughters by Jean Sasson.

Princess Sultana's Daughters, by Jean Sasson, is a biography written in the voice of "Princess Sultana," a supposedly real-life royal princess of Saudi Arabia under an assumed name. Sultana relates several events in her life to demonstrate the oppression of women in Saudi Arabia and to urge change. This is the second book in what's called the Princess trilogy.

Sultana begins by describing her family's furious reaction to discovering her authorship of the first book in the Princess trilogy. The family decides they must spare any humiliation by keeping Sultana's authorship a secret. Kareem, Sultana's long-suffering husband, reads passages about his own fictionalized persona and is mad that he is described as being weak-willed and having other unflattering characteristics.

Sultana next deals with her daughters, Maha and Amani. Maha has always been strong-willed and combative, while Amani grew up sweet and loving. Maha falls in with a young rebellious girl named Aisha and spends much time with her during the upheaval caused by the first Iraq War. It is revealed that Maha has fallen in love with Aisha. Maha becomes hysterical when told she and Aisha must be separated. Before Maha's budding lesbianism can be fully realized, the family flies Maha off to London and institutionalizes her. After medication and a several months-long stay at the institute, Maha is apparently "cured" of her lesbian tendencies.

The family soon after decides to attend the largest Muslim pilgrimage of the year, during Haj. There, Amani undergoes a spiritual conversion, and soon after she becomes militant and fundamental in her beliefs of Islam, a turn of events which dispirits and worries Sultana. Amani soon becomes intolerable, railing against her own family's wealth and getting on everyone's case for perceived sins. In prayer meetings, Amani learns from a relative that Majed, Sultana's nephew, raped a woman in a hospital who was unconscious from head injuries. The crime is covered up after Majed's father, Ali, pays off a potential witness.

The next family crisis occurs when Sultana's son, Abdullah, flees the country in order to reunite two lovers, Fayza and Jafer, who were forbidden to wed in Saudi Arabia's draconian marriage system. Sultana is proud of her son and does not alert the involved families of Abdullah's deed. Fayza and Jafer are finally allowed to wed with a ceremony in Cairo.

In Cairo, Sultana tries unsuccessfully to convince the relative of her housekeeper to stop the female circumcision of her teenage daughter. Traveling then to Monaco to visit family, Sultana learns that her sister Reema has been raped by her husband Saleem, putting her in the hospital. Reema wishes not to divorce, because in Saudi culture that would mean giving up custody of her beloved children.

The book ends with Sultana and her nine sisters getting together to celebrate the memory of their mother. Sultana renews her vow to tirelessly fight for Saudi women and to continue to make injustices known.