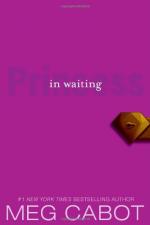 This detailed literature summary also contains Topics for Discussion on Princess in Waiting by Meg Cabot.

Princess in Waiting is a novel in the Princess Diaries' series by author Meg Cabot. The story follows the main character, Amelia "Mia" Thermopolis, as she finishes her first official visit to Genovia after she finds out that she is the illegitimate daughter of the Prince of Genovia, making Mia an official princess. Prior to Mia's arrival in Genovia, she receives a kiss from Michael. Michael is the brother of her best friend, Lilly, and the boy she has been in love with forever. Michael, professes his love for her. Mia is counting the days until their winter break from school ends and she returns to New York City to reunite with Michael and the rest of her friends.

Mia struggles with juggling her duties as a royal with the things she wants to do as a regular teenager. One of the biggest issues that Mia has to deal with is her grandmother, Grandmere. Grandmere is providing princess lessons to Mia to teach her how to be a proper royal. Grandmere also dispenses some romantic advice on how Mia should handle Michael and other boys in order to win them over and to always keep them on their toes.

Mia constantly worries about Michael wanting to dump her and go out with other girls. Mia also feels very self-conscious about her looks and her abilities when she compares herself to Michael and her other friends. By the end of the novel, Michael and Mia are officially in love and Mia has discovered that her talent is writing because she is always writing in her journal.