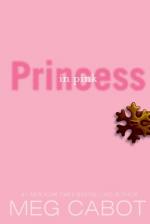 Meg Cabot
This Study Guide consists of approximately 40 pages of chapter summaries, quotes, character analysis, themes, and more - everything you need to sharpen your knowledge of Princess in Pink.

This detailed literature summary also contains Topics for Discussion on Princess in Pink by Meg Cabot.

Princess in Pink by Meg Cabot is the fifth book in the popular Princess Diaries series. In this novel, sixteen-year-old Genovian Princess Mia hopes her boyfriend will invite her to prom while dealing with a strike in the hospitality industry which results from an unfortunate incident that occurs during her birthday dinner. Princess in Pink is an engaging epistolary narrative about the problems of a typical girl who also happens to be the princess of Genovia.

As Mia's fifteenth birthday approaches, Mia laments the fact that her boyfriend, Michael, has not yet invited her to prom. Her friends believe he will ask her on her birthday, and Mia hopes that they are right. On Mia's birthday, Michael and his band perform a song written for Mia, and at dinner, Mia is pleased with her gifts; however, Grandmere's poodle escapes from her purse and trips Jangbu, the busboy, who spills lobster bisque on Grandmere and is fired.

The next day, Mia's best friend, Lilly, decides to fight against Jangbu's unfair dismissal, starting a protest which quickly escalates. At Mia's birthday party, Mia mentions prom to Michael while playing Seven Minutes in Heaven, but she is distraught when he says he would rather go bowling. Her night worsens when Lilly enters the closet with Jangbu during her turn at the game, leaving her boyfriend, Boris, devastated. The party ends when Mia's stepfather catches Lilly and Jangbu in the closet. Though Boris pleads with Lilly, she disregards his broken heart, but luckily, Tina is there to comfort him and become his new girlfriend.

The busboys' strike extends to the entire hospitality industry in New York, causing prom to be cancelled since there is nowhere to hold it. Mia's classmates blame her since the strike is Grandmere's fault. Luckily, Grandmere arranges for prom to be held on the observation deck of the Empire State Building, and Mia convinces Lana that prom will only be reinstated if she hires Michael's band to play, thus convincing Michael to take her to prom. While Michael's band plays at prom, Mia's mother goes into labor, so Mia and Michael rush to the hospital to greet Rocky, Mia's baby brother. Lilly laments losing Boris, but Boris and Tina are happy together. Mia is perfectly happy because she has become a big sister and was able to attend prom; she feels that she has finally become self-actualized.

More summaries and resources for teaching or studying Princess in Pink.