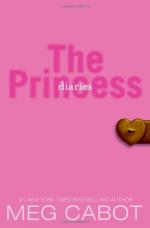 Meg Cabot
This Study Guide consists of approximately 58 pages of chapter summaries, quotes, character analysis, themes, and more - everything you need to sharpen your knowledge of The Princess Diaries.

Sunday, October 12: Mia is hideously embarrassed because she has just caught her mom and Mr. G eating breakfast in the kitchen. They were rather surprised to see her, too, thinking she was spending the night at Lilly's house. Mia wishes she had stayed there as she planned before the fight because then she would have never have seen Mr. Gianini in his boxer shorts.

Later on Sunday: Mia's mom comes into her room and lies to her, telling her that Mr. Gianini spent the night on the couch because there was a problem with the trains last night. Mia prefers to believe this lie, despite what she knows Lilly would say. Mia comes out of her room to find Mr. Gianini, fully dressed now...

More summaries and resources for teaching or studying The Princess Diaries.