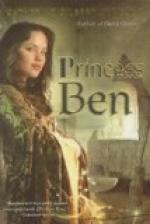 Catherine Gilbert Murdock
This Study Guide consists of approximately 31 pages of chapter summaries, quotes, character analysis, themes, and more - everything you need to sharpen your knowledge of Princess Ben.

Princess Ben has just turned fifteen as the story opens. She lives with her parents, Walter and Prudence, outside the castle although she is the true heir to the throne of Montagne. Ben is overweight and spoiled. She has overeaten during her birthday celebration and literally made herself sick. When her parents head to the mountain Ancienne on the annual pilgrimage to the site of an historic battle, Ben is forced to remain behind. Late that night, the bodies of her mother and uncle are returned to the castle and her father is missing. His body is later found in a cave atop the mountain. The people believe soldiers from Drachensbett, a neighboring country. The relationship between the two countries is strained already and becomes more so as the people of Drachensbett swear that a dragon is responsible for the deaths.

As Queen Sophia faces the reality that Walter is probably also dead, she begins to try to prepare Ben for her role as ruler. Ben is spoiled, immature, and hates the regimented role she's being forced to play. She rebels, refusing to take any of the instruction seriously. During a ball to introduce her to the kingdom and to decide on an appropriate suitor to become engaged to Ben, she behaves horribly and gains a reputation as a spoiled brat.

Sophia locks her away in a small room in an effort to keep her from snacking, hoping to bring her weight under control. However, Ben discovers a secret passage through a wall that leads to the wizard's tower where she discovers a magic book. She learns two important sets of spells - how to create fire, wind, water, and earth, and how to create a double of herself. She also begins to learn discipline as she works hard to master the spells.

When Ben is able to begin flying on a broom with the use of the wind spell, she is almost caught and has to flee through a window, leaving her double behind. The double is completely still and doesn't respond to anything. Ben flies toward the mountain and crashes there. She's soon captured by a group of Drachensbett soldiers, including Prince Florian. Having met at the ball, Florian believes Ben looks a great deal like the Princess but doesn't figure out her true identity until much later. Ben escapes the Drachensbett soldiers and returns to her body just as Florian enters the room, intent on kissing the princess in an effort to wake her from her sleep. Florian realizes that Ben has used sorcery and refuses to have anything else to do with her.

The soldiers of Drachensbett attack Montagne with plans to take over the kingdom. Ben dons a long red dress and flies over the Drachensbett soldiers, making many believe she's a dragon and scaring the attackers off.

Ben soon discovers that everyone is referring to her as a spoiled brat and sets out to learn to be a princess. Everyone is amazed at the transformation but Florian still refuses to have anything to do with Ben, the "witch." When there is a horrific scream coming from the foothills of Ancienne, Ben rushes to the rescue and finds a man dead there. Her pony throws her and runs away. When Florian sees the pony, he rushes to Ben's aid and discovers she's fighting a real dragon. Florian is injured and Ben kills the dragon. Florian admits to his love for Ben just before he dies, and Ben brings him back with a kiss. She says that there is no such thing as happily ever after, and that their lives have been good but have included some problems along the way.

More summaries and resources for teaching or studying Princess Ben.

Princess Ben from Gale. ©2005-2006 Thomson Gale, a part of the Thomson Corporation. All rights reserved.