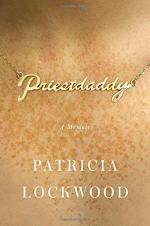 Lockwood, Patricia
This Study Guide consists of approximately 39 pages of chapter summaries, quotes, character analysis, themes, and more - everything you need to sharpen your knowledge of Priestdaddy.

After falling on hard times, Patricia and her husband Jason move back in with her parents while they get back on their feet. Patricia’s family is unique in that her father is one of the few Catholic priests with a wife and children. The author explains that her father was a Lutheran minister who was already married with children before he converted to Catholicism and was granted a papal dispensation in order to become a married priest.

Patricia and Jason met at nineteen in an online forum for poets. They formed a strong connection over the internet before meeting in person and deciding to get married. Nearly ten years later, they are faced with difficulties when Jason needs expensive eye surgery and needs to quit his job. This is when they decide to move back in with Patricia’s parents.

Life is strange as the couple is immediately faced with the unique situation of living in a rectory. Patricia has long ago left the Church and Jason was not raised Catholic. As a secular feminist now back in the middle of her childhood faith, Patricia questions the idea of home and explores her relationship to her old religion and her adult beliefs. Her ideology is very different from her conservative parents, particularly her father who is prone to blatant sexism. She befriends a seminarian who is also living at the rectory and challenges his value of traditional gender roles, mostly through humor.

In the next section, Patricia reflects on stories from her childhood in which priests were accused of child abuse. She focuses primarily on how the institution of the Church protected these abusers and how members of the congregation are complicit in a code of silence. She also reflects on her own personal history of abuse and how her parents’ initial reaction placed the blame on her as the victim. Back in the present day, her mother has a more sympathetic response after Patricia publishes a poem about her experience. Patricia and her mother then take a road trip where Patricia’s mother own brand of personal feminism comes forward.

Throughout her life, Patricia turns to writing as a powerful tool for self-expression and personal discovery. She feels she is a writer in her heart and reflects on how she could never be the singer she wanted to be. Her inability to sing beautifully in Church is a metaphor for her eventual decision that that community is not a good fit for her. The story of her struggle to become a good singer and her true identity as a writer in interlaced with the story of her teenage suicide attempt, ultimately demonstrating how she does not feel she fits into her world as a teenager.

Back in the present day, the question of who is protected by the institution of the Church is brought up again at the seminarian’s ordination. There Patricia sees another priest from her childhood who was sent away for counseling for inappropriate behavior. This question of who is protected is furthered in the next chapter when Patricia remembers her parents’ involvement in the pro-life movement of the 1970s and 1980s. Patricia also reflects on how the female body is controlled by institutions and how different women view their roles as mothers and caregivers. Through the next sections, Patricia also reflects on her mother’s role in a Church where priests almost never have spouses as well as on what life may be like as a nun.

Nine months after the start of the narrative, Patricia and Jason move back into a home of their own. Patricia reflects more broadly on her role as a woman and the way society confines women despite the advances of feminism. In conclusion, Patricia reflects on how she is always surrounded by religion and how, despite their differences, her family is always there to support her.

More summaries and resources for teaching or studying Priestdaddy.