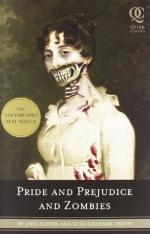 Jane Austen
This Study Guide consists of approximately 23 pages of chapter summaries, quotes, character analysis, themes, and more - everything you need to sharpen your knowledge of Pride and Prejudice and Zombies.

"Pride and Prejudice and Zombies" is a novel by Jane Austen and Seth Grahame-Smith, and details the relationship between Elizabeth Bennet and Mr. Darcy against the greater backdrop of a British zombie plague.

When the novel begins, Mrs. Bennet is determined to wed off her five daughters, despite the zombie scourge. Mr. Bennet is mostly concerned about the defense of his estate. Yet, the arrival of new residents - Mr. Charles Bingley, his sisters, and their friend Mr. Darcy, at Netherfield Park - entices Mrs. Bennet to present her daughters to them. Bingley and Jane, the eldest Bennet daughter, hit things off, while Darcy and Elizabeth Bennet, the second eldest daughter, seem to take an instant disliking to one another. As the novel progresses, Elizabeth meets Wickham, who claims to have been wronged by Darcy in the past, thus securing a bad opinion of Darcy for Elizabeth.

Yet, it is later revealed that Darcy has cast Wickham aside due to his profligate waste and debts, as well as breaking his sister's heart. Elizabeth ultimately realizes this is true, and is endeared to Darcy, despite the consternation of Darcy's aunt, Lady Catherine de Bourgh. When Wickham and the youngest Bennet daughter, Lydia, run off, it is Darcy who tracks them down, pays the dowry, and provides for them to be married. Ultimately, Jane and Bingley end up marrying, as do Darcy and Elizabeth, despite the best efforts of Lady Catherine and her ninjas to stop them.

More summaries and resources for teaching or studying Pride and Prejudice and Zombies: The Classic Regency Romance - Now with Ultraviolent Zombie Mayhem!.