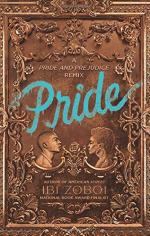 Ibi Zoboi
This Study Guide consists of approximately 41 pages of chapter summaries, quotes, character analysis, themes, and more - everything you need to sharpen your knowledge of Pride.

This detailed literature summary also contains Quotes and a Free Quiz on Pride: A Pride and Prejudice Remix by Ibi Zoboi.

The following version of this book was used to create the guide: Zoboi, Ibi. Pride. Balzer and Bray, 2018.

Pride is divided into thirty individual chapters, each of which moves in chronological order beginning with the start of summer vacation when the eldest Benitez sister, Janae, comes home from college for the summer. For the purposes of this book guide, the book is treated as having five separate sections of six consecutive chapters.

Chapters 1 – 6 introduce the Benitez family and situate them within the culturally rich and economically poor neighborhood of Bushwick in Brooklyn. The Darcy family, a wealthy black family, moves into the house across the street from them, initiating a romance between Janae, the eldest Benitez daughter, and Ainsley, the eldest Darcy son. Darius Darcy, the younger brother, and Zuri Benitez, narrator of the story, take an instant disliking to each other. The Benitez family hosts a welcome-back dinner for Janae, followed by a riotous block party in Bushwick which shows the Darcy brothers just how far from Manhattan they have come. Zuri talks to Madrina, the spiritual guide of the neighborhood, for advice on how to stop the budding romance between Janae and Ainsley, but is encouraged not to interfere.

Chapters 7 – 12 see Zuri and Janae explore their relationship with the Darcy family in more depth. Ainsley and Janae become a couple, much to Zuri’s chagrin, and even Zuri’s best friend Charlise cannot seem to understand her hostility towards the Darcys and towards Darius in particular. Later, a cocktail party hosted by the Darcy family goes awry as Janae and Ainsley break up and the youngest Benitez sisters embarrass their family with their gossiping. Zuri goes on a date with a young man named Warren who goes to Darius’ school but is more down-to-earth given that he comes from the projects.

Chapters 13 – 18 see a progression in Zuri and Warren’s relationship, as they feel closer than ever to each other after another successful date. Zuri goes to visit Howard University, her dream school, thanks to her sister Janae’s generosity in purchasing the bus tickets for her. There, she performs an original poem at a student café and receives generous applause, feeling proud and happy until she spots Darius in the crowd, also clapping. She joins him, his sister, and his friend Carrie at their table and eventually goes with the Darcy siblings to meet their grandmother before Darius drives him and Zuri home to Bushwick. The pair find themselves kissing after a pitstop for fried chicken, having put aside their assumptions about each other long enough to acknowledge their mutual attraction.

Chapters 19 – 24 reveal complications in the relationship between Darius and Zuri. They fight in the car ride home to Bushwick when Darius reveals he is the reason Ainsley and Janae broke up. Then, he warns Zuri to stay away from Warren, telling her the latter once leaked nude photos of Darius’ sister to everyone at school. Zuri ends things with Warren and grants Darius a chance to go on a date with her. They have a great time together and both feel they are falling in love with one another quickly. However, their next date is disastrous, as Darius takes Zuri to Carrie’s fancy party and acts utterly unlike himself, causing Zuri to storm out on him and the party.

Finally, Chapters 25 – 30 wrap up the novel. Darius chases Zuri to the train station, where they barely have a moment to speak before seeing on Instagram that Zuri’s little sister Layla is at Carrie’s party with Warren, getting drunk. They rush back to the house and find that Carrie has rescued the girl and kept her safe. Zuri and Darius take Layla back to his house in Bushwick and, while she naps, they talk over their differences on the rooftop and decide that their love is more powerful even than their pride and their prejudice. That night, the spiritual guide, Madrina, passes away, and their neighborhood is altered forever. Her nephew, Colin, inherits the building she owns which is the same building in which the Benitez family lives. He signs a deal with a developer and forces the Benitez family to move away from Bushwick, opening their eyes to a whole new part of town and giving them a new start, though Zuri and Darius hold on to each other through the changes and remain together.

More summaries and resources for teaching or studying Pride: A Pride and Prejudice Remix.