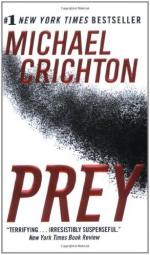 Michael Crichton
This Study Guide consists of approximately 36 pages of chapter summaries, quotes, character analysis, themes, and more - everything you need to sharpen your knowledge of Prey.

This detailed literature summary also contains Topics for Discussion and a Free Quiz on Prey by Michael Crichton.

At 10:04 A.M. on what would become known as "Day 1," Jack is shopping for new placemats. He's the "house Dad," having lost his job at MediaTronics after learning that his boss, Dan Gross, was cheating and stealing. Jack, ignoring the advice of his attorney who told him to get out of the company fast, tells a board member, who is in on the scheme, and Jack is summarily fired for "gross negligence." Jack's wife, Julia, is vice president of another computer-based company, Xymos, and Jack watches as she spends more time at work and grows more distant. Jack soon believes that she's having an affair, though he'll discover that she's become overly involved with a project at work.

Julia's company has a Department of Defense contract to produce airborne cameras. Large prototypes are easily shot down so Xymos decides to create micro-sized cameras that will "swarm." The problem is that the small cameras can't operate in winds. Discovering that the swarms are evolving and knowing that the funding is about to be withdrawn, Xymos sets a swarm free, hoping that it will "learn" to adapt to the environment. Julia begins interacting with the swarms, which are not only self-replicating but are also evolving and learning predatory behavior that results in the deaths of several animals. Julia herself becomes host to a swarm and infects her children. The baby, Amanda, reacts violently and is hospitalized, but recovers miraculously when exposed to an MRI.

Then Jack is offered a job with MediaTronics. He's told that there are computer programming issues but feels certain they're not telling him everything. When Julia is in an accident, she babbles about the job and Jack decides to find out for himself what's going on. He accepts the position and soon sees the swarms in action. They first kill a rabbit and that's when Jack, accompanied by a co-worker named Mae, learns that the swarms are using the rabbit as food for the bacteria that is part of the manufacturing process - now part of the self-replication process. Then the swarms attack Jack and later kill two other programmers, taking their bodies to the nest. The evolution continues with swarms able to reproduce specific looks so that they appear to be people.

Jack and Mae locate the nest and destroy it only to discover that Julia and Ricky are serving as hosts and intend to infect Jack and Mae. Jack and Mae find a virus that has attacked the bacteria-growing kettles and take the virus, hoping to eliminate the bacterial component of the swarm and therefore kill the swarm. They manage to introduce the virus to those serving as hosts, including Julia, and escape as the plant explodes from a combination of overheating and built-up methane gas.

At home, Jack infects the children with the virus, hoping it will eliminate any of the nanocameras that remain in the three children. While he tries to be hopeful, he worries that he himself is infected and says that the children are aware of his concern. Jack now knows that Julia was to blame for the entire incident, and that she'd taken a step with no thought to long-term impact.

More summaries and resources for teaching or studying Prey.