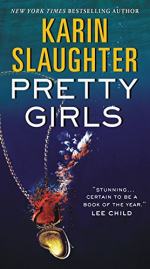 Slaughter, Karin
This Study Guide consists of approximately 60 pages of chapter summaries, quotes, character analysis, themes, and more - everything you need to sharpen your knowledge of Pretty Girls.

The following version of this book was used to create this study guide: Slaughter, Karin. Pretty Girls. HarperCollins, 2015.

After the disappearance of Claire and Lydia’s teenaged sister Julia more than two decades ago, the two women have not spoken since. The novel begins with Claire and her husband Paul at an Atlanta bar celebrating the end of Claire’s probation period for assaulting her tennis partner. The two joke around before the mood becomes somber at discussing the disappearance of another teenaged girl, Anna Kilpatrick. Claire and Paul leave the bar, ducking into an alley to be intimate, when they are attacked by a robber. Paul attempts to protect Claire and is stabbed, bleeding to death.

The novel transitions to include Lydia at the basketball game of her daughter, Dee. She recounts her intense dislike for the fellow mothers at the preppy high school while also waiting for her boyfriend, Rick. When Rick arrives, he also mentions the story of Anna Kilpatrick before telling Lydia that Paul was killed. Lydia appears somber but hopes that Paul suffered before he died.

After Paul’s funeral, Claire begins to descend into hopelessness, realizing just how much of her life Paul oversaw. Robbers target the house and Claire must continue talking to the police. When she enters Paul’s home office to search through his things, she discovers violent pornographic videos on his computer and Claire cannot believe that her husband would have been interested in something so vile. She goes to Paul’s grave, thinking through their relationship, where she sees Lydia about to defile his gravesite. The two talk briefly before Claire runs off.

Claire returns to her home, intensely disturbed by the video, enough to bring them to the police station in confusion. The police tell her the videos are fake, and Claire returns home though not fully convinced they are telling her the truth. She continues investigating Paul’s files, finding many on various women she does not know containing surveillance information. When she calls Lydia to help her look through everything, she asks Lydia what truly went on between her and Paul. When Lydia recounts her story that Paul attempted to rape her many years ago, Claire finally begins to believe her sister.

While new details emerge in the Anna Kilpatrick disappearance case, the two sisters continue looking for ways to tie Paul to the crime as well as discover the extent to which he was involved in the production of the violent pornography. When Claire and Lydia uncover a residence Paul was keeping in the countryside, they visit the location, eventually finding hundreds of VHS tapes of the same pornography as well as one featuring their sister Julia, showing her death. Paul appears at the house, alive, and takes Lydia hostage while knocking Claire unconscious.

Claire begins to search desperately for Lydia, continuing to grow more distrustful of the local law enforcement officers. Lydia is trapped in the trunk of Paul’s car while he drives for hours before he finally arrives back at his secret residence. He begins to torture Lydia, revealing that he is the man on the violent videos and that he and his father both participated in the killing of Julia. Claire and now her mother are racing to find Lydia before it is too late.

When Claire finally finds Lydia at Paul’s secret house, she sets a fire to attempt to lure him outside. When he confronts her, she shoots him before entering the house to save Lydia from the fire and recover the VHS tapes. After exiting the house, Claire shoots an injured Paul again and the two leave him to die before digging up the backyard and discovering Julia’s body.

The novel ends with the sisters and their mother reconciling and cleaning out Julia’s room, discussing their favorite memories from their life together.

More summaries and resources for teaching or studying Pretty Girls.