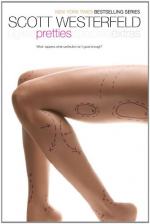 Scott Westerfeld
This Study Guide consists of approximately 29 pages of chapter summaries, quotes, character analysis, themes, and more - everything you need to sharpen your knowledge of Pretties.

Bubbly is a word used in this book to describe a state of lucidity, of intelligence, and clarity.

Pretty-headed is a term to describe the carefree, simple-minded mindset that all pretties experience after the surgery.

Pretties are people who have had the surgery to make them look uniform with everyone else.

Uglies is what people before the age of sixteen, before the surgery, are referred to as. These people have a natural appearance that has not been altered surgically and this appearance is considered ugly in this society.

Interface rings are rings that everyone in the city must wear that tell the wardens where they are at all times. When she was an ugly, Tally often took her ring off in order to sneak out at night. In this book, Tally is caught with the ring off while procuring the cure from...

More summaries and resources for teaching or studying Pretties.