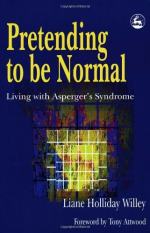 Liane Holliday Willey
This Study Guide consists of approximately 24 pages of chapter summaries, quotes, character analysis, themes, and more - everything you need to sharpen your knowledge of Pretending to Be Normal.

Pretending to Be Normal: Living with Asperger's Syndrome Summary & Study Guide includes comprehensive information and analysis to help you understand the book. This study guide contains the following sections:

This detailed literature summary also contains Topics for Discussion and a Free Quiz on Pretending to Be Normal: Living with Asperger's Syndrome by Liane Holliday Willey.

Pretending to be Normal is the autobiography of Liane Holliday Willey, which focuses primarily on her experience with Asperger's Syndrome, which is a high functioning form of autism. The author writes the book in part to help others with the syndrome navigate through life and avoid feeling alone. Today Willey is a motivational speaker who reaches out to people with autism.

In the introduction to the book, Willey emphasizes that autism is not a single disease but is a spectrum of disorders including many abilities and disabilities. Asperger's Syndrome involves social impairments, difficulties communicating, and challenges engaging in abstract thought. 'Aspies' or Willey's term for those with Asperger's Syndrome, tend to have very specific interests, highly structured and repetitive routines, unusual ways of speaking and talking, and poor coordination. It is not always obvious whether those you know have Asperger's because many of the challenges can be concealed.

When Willey was young, her challenges due to Asperger's were identified as intelligence and stubbornness. As a child, Willey wanted to be separate from her peers and left with her imaginary friends. She enjoyed organizing supplies to no end and hated sharing. Willey had few friends and had a number of social disasters, although her patient and loving parents helped her along the way. She had to learn to mimic others to get around socially. In her teenage years, Willey was never particularly bothered by her differences. In high school, where it was most important to belong to a group and many behaviors could easily be mimicked by others, Willey had a relatively easier time fitting in. She performed poorly in athletic activities but succeeded in speech and drama competitions.

In college, Willey lost her way because she was largely removed from her support network. She had trouble navigating around school, focusing in class, and developing friends. While Willey knows that she suffered due to her disability, in retrospect she is not sure how much she would have done differently. After four years as an undergraduate and two years of graduate school, she moved onto her next stage of life. Willey could make herself useful to others and follow social rules and quickly sought jobs that would suit her interests, which included teaching, a job she enjoyed a lot. Willey also met her husband, Tom, after her graduation, who was a constant source of support to her.

As time went on, Willey and her husband had children. They adjusted their lives around many of Willey's disabilities without knowing that she had Aspberger's Syndrome. When her twin daughters were born, she had the sense that one of them had a problem and it later turned out that her daughter was diagnosed with Aspberger's, leading to a similar diagnosis for Willey. Willey now understood all of the challenges in her life and learned everything that she could about the condition. Her family learned to adjust to the unique challenges faced by Willey and her daughter.

Pretending to be Normal has seven chapters and also contains seven appendices for 'Aspies' and those who are members of support groups for 'Aspies.'

More summaries and resources for teaching or studying Pretending to Be Normal: Living with Asperger's Syndrome.

Pretending to Be Normal: Living with Asperger's Syndrome from BookRags. (c)2022 BookRags, Inc. All rights reserved.