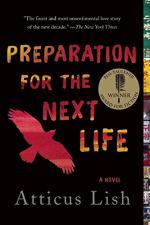 Related Topics
The War For Gloria

Preparation For the Next Life Summary & Study Guide

Preparation For the Next Life Summary & Study Guide Description

Preparation For the Next Life Summary & Study Guide includes comprehensive information and analysis to help you understand the book. This study guide contains the following sections:

This detailed literature summary also contains Quotes and a Free Quiz on Preparation For the Next Life by Atticus Lish .

The following version on of this book was used to create this study guide: Lish, Atticus. In Preparation for the Next Life. Tyrant Books, 2015. 3rd Edition.

Zou Lei is a young woman who immigrated illegally from Afghanistan. She struggles to find and maintain work due to her status. Her most consistent job is working at a Cantonese restaurant. However, her manager Sassoon yells at her. The boss Polo rarely gives her what she has earned. So, she tries to find other ways to earn a green card. One way is through a man she falls in love with: Brad Skinner.

Skinner is a war veteran who suffers from severe PTSD and anxiety. He struggles with hallucinations, nightmares and an alcohol addiction. He moves into the basement of the Murphy’s home where he pays rent. When he meets Zou Lei, the two immediately fall in love and he vows to keep her from being deported. However, Skinner’s PTSD causes fights between them as he struggles to overcome his disorder.

Meanwhile, Jimmy - an ex-convict and son of Mrs. Murphy - returns to the family home. He is a white supremacist who blames Chinese immigrants for the deterioration of his hometown. He considers all immigrants to be inferior to him. In his mind, this justifies all of his crimes, including the rape and death of a Chinese woman. He has no care for consequences and believes his life is over after his prison stay.

The three come together as life takes a turn for the worst. Skinner’s PTSD is accelerating to the point of violence, even against Zou Lei. Zou Lei, on the other hand, loses hours at work due to a new hire named Monroe, despite the latter's poor attitude. Zou Lei travels 20 miles to a town looking for a job. There, she meets a man named Tesha Noor, a fellow Muslim immigrant who offers his help. Tesha gives her some food and has his wife take her to a nearby Mosque. Once there, Zou Lei learns that she should be preparing for the next life, and not worry about her current one. This encourages her to find her own path to citizenship without Skinner’s help.

Meanwhile, Jimmy - who has been selling drugs and stealing to make ends meet - goes to a Chinese massage shop. Once there, he forces the women to have sex with him. As he leaves, Jimmy tells her he has Aids and she will need to get herself checked. He later learns that she died and he blames a Chinese crime ring. During this, Skinner’s PTSD begins to accelerate. He becomes more irate, especially when he discovers Jimmy has stolen some of his possessions.

Skinner resolves to stay strong for Zou Lei, however. One day, with Zou Lei at his apartment, Skinner leaves for a walk. When he returns, he finds Zou Lei missing with all of her belongings in the room. He confronts Jimmy and the two get into a fight. Mrs. Murphy calls 911 and has Skinner arrested. Skinner tries to explain to the police that he believes Jimmy hurt Zou Lei. The police do not believe him until they discover Jimmy’s criminal record. Then, they release him, unwilling to pursue Zou Lei’s case. The reader then learns that Zou Lei escaped from Jimmy, and walked over 30 miles barefoot before returning to the Murphy’s home.

Before Zou Lei arrives, however, Skinner returns with his gun. He gets Jimmy to open the door and chases him into his bedroom. Jimmy swears he did not do anything to Zou Lei, but Skinner does not believe him. Skinner shoots Jimmy in the back of the head and flees. Eventually, he wanders into an alleyway. There, Skinner realizes he has lost everything and only destruction follows where he goes. Choosing to end the cycle of violence, he shoots himself in the head.

When Zou Lei arrives at the Murphy Home, she learns Skinner is not there. She later finds his body and takes back her shoes and the credit card he had left for her inside. Then, she leaves for Phoenix, Arizona where she temporarily works at a Chinese restaurant. However, when the boss discovers her fake Social Security number, she is forced to leave. Luckily, a ranch owner offers her a job, and promises to protect her. She promises Skinner that she will live as best as she can with what he has given her in his passing.

Preparation For the Next Life from BookRags. (c)2022 BookRags, Inc. All rights reserved.