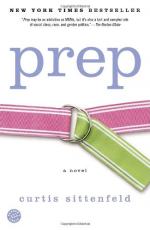 Curtis Sittenfeld
This Study Guide consists of approximately 97 pages of chapter summaries, quotes, character analysis, themes, and more - everything you need to sharpen your knowledge of Prep.

This detailed literature summary also contains Quotes and a Free Quiz on Prep by Curtis Sittenfeld .

Lee Fiora, a Midwestern girl who decided to enter the pretentious world of boarding school, is the main character in the novel Prep by Curtis Sittenfeld. Even though Lee had told her parents that she wanted to attend Ault because it was a better school academically than her public school, she really hoped to find a handsome, intelligent boyfriend. Lee spent her boarding school years trying to fit in with her schoolmates rather than studying. Although she tried to hide her own insecurities, Lee’s real personality had a way of showing itself and getting her into trouble.

The novel is narrated in the past tense by an older (now 30-something) Lee who occasionally intersperses thoughts and information from the present tense. Each chapter deals with one or two topics that are resolved in the course of that chapter. In the conclusion of each chapter, the narrator often sums up the lessons learned in that section.

In Lee’s first semester at Ault she discovered a black girl, a fellow scholarship student, was responsible for stealing money from the rich girls in their dorm. Even though Lee understood the girl’s reasons for stealing the money she turned her in for the thefts. Later that school year Lee had an encounter with Cross Sugarman, the most popular boy in her freshman class. This encounter solidified Lee’s desire to be Cross’s girlfriend.

In the final months of her freshman year Lee met Conchita Maxwell. Because Conchita was Mexican, Lee assumed she was on scholarship even though Conchita’s clothing and dorm decorations indicated otherwise. During the school wide game of Assassin Lee admitted to Conchita that she had a crush on Cross and that she hoped the game would lead her and Cross to one another. Conchita manipulated the game so that she could keep Lee safe from being “killed” while Lee worked her way toward Cross. When Lee told Conchita that she wanted to room with Martha instead of Conchita, however, Conchita “killed” Lee taking her out of the game.

In Lee’s sophomore year, she was obsessed with an intern English teacher who was more like Lee than Lee wanted to admit. Also, as a sophomore, Lee learned she had an affinity for cutting hair. She stopped giving haircuts when Martha, her roommate, helped her realize that people were taking advantage of Lee’s ability by letting her help them without giving her anything in return.

In her junior year, Lee angered her father when she treated him disrespectfully when he came to visit her at school during parents’ weekend. Also in her junior year Sin-Jun, one of Lee’s friends, tried to commit suicide. Lee learned later the attempt was partly because Sin-Jun was gay and was trying to break off a sexual relationship with her roommate.

It was in Lee’s senior year that she got her wish to be close to Cross, who turned out to be the class play boy. He came to her dorm room and the two experimented sexually with Lee finally having sex with him. Lee asked Cross not to advertise their relationship but later got angry with him because he didn’t send her a rose on Valentine’s Day. Cross used Lee’s request not to make their relationship public against her when she confronted him about rumors that he had a new girlfriend. Lee additionally realized from Cross’ reaction that he would not have publicly recognized her as his girlfriend and that his relationship with her was possibly part of a sex game the senior boys played.

Even though Lee spent her years at Ault trying to prove she was like the other students, she blew her cover when she was interviewed by a newspaper reporter for The New York Times. Lee was handpicked for the article because it was believed she was a scholarship student who would say good things about the school. Instead Lee confirmed the writer’s suspicion that boarding schools were still places where racism and socio economic factors played a role in the way students were treated.

More summaries and resources for teaching or studying Prep.