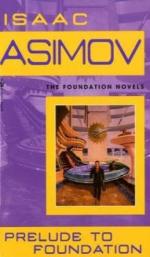 Isaac Asimov
This Study Guide consists of approximately 81 pages of chapter summaries, quotes, character analysis, themes, and more - everything you need to sharpen your knowledge of Prelude to Foundation.

This detailed literature summary also contains Topics for Discussion and a Free Quiz on Prelude to Foundation by Isaac Asimov.

Prelude to Foundation tells the story of mathematician Hari Seldon, fleeing around the enclosed planet Trantor, evading the Emperor who wants to control his psychohistory, and coming to understand that his invention can indeed have a practical application in predicting the fate of mankind.

Prelude to Foundation is set in the year 12,020 G.E. (Galactic era), during the rocky reign of the Emperor Cleon I. The Galactic Empire has been in decline for years when mathematician Hari Seldon arrives from Helicon to read a theoretical paper about "psychohistory" before the Decennial Mathematics Convention on Trantor, the galactic capital. The Emperor wants him to turn this into a practical tool to shore up his reign, and he begins a "flight", which takes him to four distinct sectors of this planetary "human beehive", directed by a journalist, Chetter Hummin, who warns that Cleon's chief of staff, Eto Demerzel, is a dangerous schemer. Demerzel takes Seldon to the Streeling University and introduces him to a young historian, Dora Venabili, whom he convinces to accompany Seldon and protect him. Seldon is frustrated with his progress in learning history and takes an excursion to "Upperside", where he narrowly avoids a prowling "jet-down" and dying of exposure.

Hummin moves them to Mycogen Sector, a severely ingrown and misogynous society led by the authoritarian High Elder, Sunmaster Fourteen. Venabili finds Seldon's plans for gaining access to local legends dubious, and he must treat Raindrop Forty-Three brutally to get her to talk. During a tour of a microfarm tour, Raindrop Forty-Three reveals that Mycogenians believe in history, not religion, and records that in a Book that she lends him. Reading the dull tome introduces Seldon to robots and leads him to risk invading the "Sacratorium", the sector's most sacred-and dangerous-place. Caught in the "Aerie" by Sunmaster, they appear doomed to death until Hummin appears and wins their release.

Hummin relocates them in Dahl Sector, a working class community. They clash with their landlords, the bigoted Tisalvers, but learn of a soothsayer who lives in the dangerous Billibotton slum. Mother Rittah reveals the names of the two legendary robots of from mankind's prehistory. Venabili proves a skilled knife fighter and becomes a local legend, defending them. Davan, a social activist trying to unite people against the Emperor, summons them back to Billibotton, and Seldon feels he can help the movement most by concentrating on psychohistory, which is beginning to look practical. Mistress Tisalver turns them in to the security forces. They resist arrest, and flee into the sewers, led by twelve-year-old Raych, their guide in Billibotton.

Hummin fails to appear, but Sgt. Emmer Thalus conveys them to Wye Sector, where Mayor Rashelle opulently hosts them. She has pretensions to unseat the Emperor and separate Trantor from the rest of the failing galaxy and wants psychohistory to validate the coup. Seldon refuses, like he refused the Emperor earlier. Demerzel reacts with a lightning coup that restores Rashelle's father to the throne. Rashelle fails in her attempt to kill Seldon rather than hand him over to Demerzel, whom she reveals is Sheldon's "friend", Hummin. This dual personality convinces Seldon that his wanderings and misadventures helped him clarify his theory of psychohistory. After Seldon explains the evolution of his limited theory, which he owes thanks to Rashelle, he guesses that Hummin/Demerzel is the legendary robot he has been seeking. Finally, R. Daneel Olivaw confesses that he acts under both personae and explains how for millennia he has watched over humanity, obeying not only the three Laws of Robotics, but also a more demanding "Zeroeth Law". He sees psychohistory as a means of making that protection more certain. With the truth told, Olivaw promises to arrange all Seldon needs to continue his research and guarantees his safety through the Demerzel persona. They will see one another only rarely in the future. Seldon's feelings for Venabili have reached the point that he ignores the fact she is a robot, and she drops her objections that she is not right for him.

More summaries and resources for teaching or studying Prelude to Foundation.