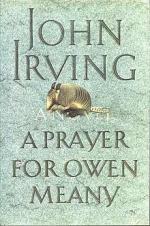 John Irving
This Study Guide consists of approximately 40 pages of chapter summaries, quotes, character analysis, themes, and more - everything you need to sharpen your knowledge of A Prayer for Owen Meany.

A Prayer for Owen Meany Summary & Study Guide includes comprehensive information and analysis to help you understand the book. This study guide contains the following sections:

This detailed literature summary also contains Topics for Discussion on A Prayer for Owen Meany by John Irving.

Middle-aged John Wheelwright sets out to narrate the story of his childhood in Gravesend, New Hampshire. He remembers his best friend, Owen Meany, as the boy who killed his mother and restored John’s faith in God. John describes Owen as a strange child. A tiny boy, even for a dwarf. His skin is luminous and his voice high and nasally. John remembers Owen’s love for his mother, Tabitha Wheelwright, as bordering on a crush. Tabby, in return, treats Owen as though he were her own son, going so far as to intervene with his parents on Owen’s behalf to ensure his attendance at the prestigious Gravesend Academy. One of the greatest mysteries in John’s life is the identity of his father; John was conceived during a “fling” his mother had while traveling to Boston. The Wheelwrights are an old and distinguished Gravesend family (the original John Wheelwright was one of the founding fathers) where as Owen’s family are not. Owen accidentally kills Tabitha Wheelwright, John’s mother, with a foul ball during a baseball game. A brokenhearted John spends half of his time with his grandmother and the other half the time with his stepfather, Dan Needham. John loves Dan, who teaches history at Gravesend Academy, as Dan becomes like a real father to him.

In December 1953, six months after Tabby’s death, Owen Meany wins two starring roles—one as baby Jesus in the church production of the Christmas story and the other as the Ghost of Christmas Future in Charles Dickens’s A Christmas Carol. The church production goes amok and awry when Owen spies his parents in the audience. His performance in the Dickens play is equally inspiring and frightening. During the final performance, Owen has a vision in which he sees his own gravestone engraved with the date of his death. Owen begins to experience a reoccurring dream revealing further details of his death, leading him to believe he is God’s instrument. He reveals to John that he believes he interrupted an Angel of Death when it came to take Tabby and as a result, God caused him to kill her. John believes in a fevered state, Owen hallucinated, mistaking Tabby’s dressmaker’s dummy for an angel.

Owen forces John to begin to practice “the Shot” and the boys enter Gravesend Academy. Owen thrives both academically and socially and writes a column called “THE VOICE.” However, he makes an enemy of the new headmaster who finally manages to expel Owen when he discovers Owen has been making fake IDs for classmates. Owen retaliates by removing the statue of Mary Magdalene from the local Catholic Church and placing it in the morning meeting hall. Owen’s expulsion loses him scholarships to Harvard and Yale as well as the University of New Hampshire. He enrolls in ROTC to pay for college. John declares an English major and excels whereas the only classes in which Owen receives good grades are the ROTC classes. Owen and Hester, John’s only female cousin, develop a relationship. Owen hopes for a combat assignment in Vietnam, as that is where he believes—based on his visions—he will die. However, his short stature prevents him from completing the obstacle course and he is assigned administrative duties in Arizona (he accompanies the bodies of fallen soldiers to their homes). John attends graduate school. Owen amputates John’s “trigger finger” with a diamond saw at his father’s monument shop to help ensure John is never drafted.

In the summer of 1968, Owen calls John and asks him to come to Phoenix for a few days. The two friends spend a few days together. John accompanies Owen to his next assignment—delivering the body of a dead soldier to his family—and observes the soldiers younger brother, Dick Jarvits. The large fifteen-year-old boy lives for the day when he enlists, goes to Vietnam, and kills Vietnamese. On the day he believes he is destined to die, Owen accompanies John to the airport for his return flight. They watch a group of nuns with a number of Vietnamese war orphans disembark from a plane. Owen assists the nuns, escorting the male children to the bathroom. Dick Jarvits enters with a live grenade in his hand. In perfect Vietnamese, Owen orders the children to lie down. Jarvits throws the grenade into the room and John catches it. John and Owen’s dogged practice of “The Shot” pays off; John tosses the grenade to Owen, who leaps into the air. John catches Owen and lifts him to the windowsill. The grenade detonates, blowing Owen’s arms off below his elbows. Owen bleeds to death in the lap of a nun and dies a hero.

The day before Owen’s funeral in Gravesend, John visits Reverend Merrill. Owen’s ghost possesses the reverend and reveals Merrill is John’s father. The reverend reveals he wished for Tabby to die just before the ball struck her and as a result, God has forsaken him. John plays a prank on the reverend to help restore his faith—he places Tabby’s dressmaker’s dummy outside the church and the reverend mistakes it for her ghost. His faith restored, Reverend Merrill is able to deliver a heartfelt eulogy for Owen.

After the funeral, John visits the Meanys. Mr. Meany claims Owen was a virgin birth, something he told Owen when he was eleven years old and about the same time Owen accidentally killed Tabby Wheelwright. To John, this revelation is monstrous and cannot possibly be true. John continues to ask God to give Owen Meany back.

A Prayer for Owen Meany from BookRags. (c)2022 BookRags, Inc. All rights reserved.