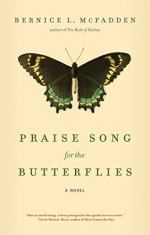 Related Topics
The Book of Harlan

Bernice L. McFadden
This Study Guide consists of approximately 79 pages of chapter summaries, quotes, character analysis, themes, and more - everything you need to sharpen your knowledge of Praise Song For the Butterflies.

Praise Song For the Butterflies Summary & Study Guide includes comprehensive information and analysis to help you understand the book. This study guide contains the following sections:

This detailed literature summary also contains Quotes and a Free Quiz on Praise Song For the Butterflies by Bernice L. McFadden.

The following version of this book was used to create this guide: McFadden, Bernice, Praise Song for Butterflies, Akashic Books, 2018.

McFadden’s novel is divided into the sections “After,” “Before,” “Wife of the Gods,” “Eden Rehabilitation Center” and “New York City,” which represent major milestones in the life of Abeo Kata, the main character who is sold into ritual servitude at age 9 in a fictional West African country. The novel, narrated in the third person, has 46 chapters, two After sections at the beginning and end and an introduction that offers a brief history of Ukemby, the fictional West African country where McFadden set most of her novel.

The novel begins with an epigraph that explains the idea of trokosi: “The word trokosi comes from the Ewe words tro, meaning deity or fetish, and kosi, meaning female slave.” Then readers learn about Ukemby, a West African country with a long history of colonialism, but “about which very little is known before the seventeenth century.” The action of the novel begins in New York City in the summer of 2009 where Abeo lives as an adult. As she’s walking to work at a beauty salon, she sees a man she recognizes from Ukemby and moves to stab him with a screwdriver.

Then the novel travels back in time to give readers a picture of Abeo’s early childhood, which is happy and privileged. She lives with her little brother, mother and father, who works at the finance ministry in Ukemby. Abeo’s beloved aunt, Serafine, comes to visit from the United States. Things start to go downhill when Wasik, Abeo’s father, learns that his father has died in Prama, the rural village where he was born. The family attends the funeral and then decides to bring Grandmother, a strict and traditional woman who has refused to accept Catholicism, back to the city to live with them. When grandmother arrives in Port Masi, where the family lives, she begins to question their way of life. Shortly afterward, Wasik learns he is being investigated because money is missing from the finance ministry. The stress from the fighting between Wasik’s wife, Ismae, and his mother and the investigation begin to erode his mental health. Grandmother suggests Wasik sell Abeo to a shrine to atone for a curse brought on by Ismae’s family. Eventually, in the middle of the night, Wasik gives in and secretly takes Abeo to a shrine where he sells her. She is 9 years old.

As a wife of the gods, Abeo works in corn fields all day and eats meager meals with other girls who have been sold to the shrine. Beatings by Duma, the priest’s son, are common. When Abeo gets her period, she begins to endure systematic rape. Because the priest is too old to sire children, he gives the responsibility to his son, Duma, who has three wives and still brutally rapes the girls at the shrine. One girl hangs herself from a tree. Another is blinded. Several, including Abeo, get pregnant and have children. Abeo’s son, Pra, is carried away by the river one day and dies.

Meanwhile, back home, Abeo’s family is disintegrating over Wasik’s choice. Wasik will not tell anyone where he has sent Abeo and although Ismae moves out for a time, she comes back after he attempts suicide. Ismae tells lies about where her daughter is, saying they sent her to a boarding school. Wasik is cleared of all charges connected to the embezzlement, but it doesn’t seem to make his life better. Ismae gets pregnant again, but she miscarries and dies. When Serafine comes home to attend her sister’s funeral, McFadden reveals that Serafine, who was raped as a teenager in the United States, is Abeo’s real mother. When she finds out what has happened to her daughter, Serafine goes looking for Abeo, but there are so many shrines in Ukemby that she cannot find her.

McFadden also weaves in the story of Taylor Adams, a half white, half black American woman who learns about the practice of ritual servitude in West Africa and then quits her job at IBM to open a shelter for girls in Ukemby. She and her partner begin buying girls out of slavery and then rehabilitating them at Taylor’s center, which she names the Eden Rehabilitation Center. When Taylor’s partner, Allen, shows up at the shrine where Abeo lives, Duma is more than happy to sell her because Abeo has gone crazy with grief over the death of her son, Pra. Allen succeeds in buying Abeo and he brings her to Eden.

Although Abeo won’t talk at first and shows extreme symptoms of post-traumatic stress, Taylor discovers that she loves Wizard of Oz. Seeing the film helps Abeo come back to herself and retrieve some of her memories. Eventually, Taylor helps Abeo call an aunt, who takes Abeo in. Eventually, they reach Serafine in New York and she brings Abeo to the United States. But the reunion with her real mother is not as warm as Abeo was hoping -- Serafine is struggling with her guilt over giving Abeo up and working through a divorce. Serafine has also developed a drinking problem.

Abeo finds solace with the family of Chipo Hama, an old neighbor from Ukemby. She finds work in a hair salon and gets a boyfriend. At the end of the novel, McFadden reveals that Abeo stabs Duma in the head with a screwdriver in her dreams, thus ending her attachment to him and moving forward in her process of healing.

More summaries and resources for teaching or studying Praise Song For the Butterflies.

Praise Song For the Butterflies from BookRags. (c)2022 BookRags, Inc. All rights reserved.