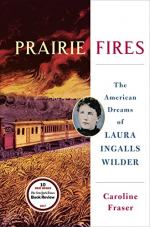 Caroline Fraser
This Study Guide consists of approximately 67 pages of chapter summaries, quotes, character analysis, themes, and more - everything you need to sharpen your knowledge of Prairie Fires.

The following version of this book was used to create this study guide: Fraser, Caroline. The American Dreams of Laura Ingalls Wilder. Metropolitan Books, 2017. Frst edition.

In this biography of the life of "Little House on the Prairie" writer Laura Ingalls Wilder, Fraser places her subject's life against the larger realities of the Great Plains at the end of the nineteenth century and beginning of the twentieth century. The author exposes the ways in which the American Dream--that farmers on the Plains could be self-sufficient--was not possible for most homesteaders, including the Ingalls family.

After tracing Laura Ingalls Wilder's ancestry, the author describes Wilder's peripatetic childhood, during which her parents, Charles and Caroline Ingalls, traveled from Wisconsin, to Kansas, to Minnesota and Iowa, and later to the Dakota Territory in search of a viable life based on homesteading. Laura was a mere toddler when she went to Kansas and glimpsed the last of the virgin prairie, including wolves circling around her cabin and Osage Indians arriving at her house. Her family had squatted on Osage land, and then spent several rootless and difficult years before heading to the Dakota Territory. During this time, her older sister, Mary, was stricken with an illness that caused her to go blind, and the family faced ecological disasters, such as droughts and locust infestations that made them destitute.

Charles, forced to look for new opportunities, brought his family to the Dakota Territory, where he ultimately worked in town rather than on his homesteading claim to make a living. Laura, forced to work to support her family from a young age, became a seamstress and schoolteacher, and the family survived the hard winter of 1880-81, when blizzards forced the trains to a standstill and the town almost survived. The town's savior was Almanzo Wilder, a young homesteader who headed off in search of grain and whom Laura married at a young age.

Laura's early married years were also plagued with misfortune. After giving birth to a daughter named Rose (later Rose Wilder Lane), Laura lost an infant son and witnessed the burning of her house. Unable to make a living as homesteaders in the dry Dakotas, she and Almanzo, whom she called Manley, eventually headed south to Missouri, where they settled on a claim called Rocky Ridge Farm while they worked to support themselves in town. Ultimately, they, like Charles Ingalls, were forced to do other work to support their farm.

After Rose, who had divorced her husband, started working as a journalist in California, Laura became her daughter's student, eager to learn how to make money by writing. Laura originally had a column in a Missouri newspaper written from the perspective of a farmer's wife. At the same time, Rose traveled widely in the United States and Europe while writing pieces for major periodicals. She fell in love with Albania and informally adopted an Alabanian teenage boy as her son (she had given birth to a stillborn boy shortly after marrying).

Returning home to her parents' farm, Rose was stricken with depression, but she constructed a house for her parents on their claim. Throughout the narrative, the author cites extensively from Rose's and Laura's letters and writings to paint a portrait of a complicated mother-daughter relationship. Over time, Rose, who went into debt over extravagances that included spending a vast sum on her parents' house, became her mother's writing coach. Encouraging and sometimes berating her mother, Rose encouraged Laura to publish her autobiography, which became the successful eight-book "Little House" series.

Over time, Laura became a confident and successful writer. Throughout her series, she and Rose merged fact and fiction, and Fraser emphasizes that they at times included fiction in their writing while publicizing the work as a true story. While Fraser emphasizes, by including historical details about the time, the impossibility of making it as a small farmer on the Plains because of environmental and ecological factors, Rose and Laura continued to promote and praise the self-sufficiency of the western farmer. Laura's books were paeans to the life of the independent farmer, but the reality, as Fraser explains, is that most homesteaders could not make a living. By including extensive details about Laura's life and writing and her correspondence with her daughter, the author explains the complicated collaboration by which Laura's books came to print and became American classics.