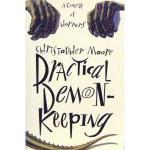 Christopher Moore
This Study Guide consists of approximately 41 pages of chapter summaries, quotes, character analysis, themes, and more - everything you need to sharpen your knowledge of Practical Demonkeeping.

This detailed literature summary also contains Topics for Discussion and a Free Quiz on Practical Demonkeeping: A Comedy of Horrors by Christopher Moore.

Travis O'Hearn's traveling companion is Catch, the destroyer, a demon Travis accidentally called up seventy years ago who has a nasty habit of eating people. Since then, Travis has been trying to send Catch back to hell. In the small California coastal town of Pine Cove, Travis hopes to find the secret to getting rid of Catch. He also finds a community of odd characters who will help him in his quest.

Seventy years ago, Travis O'Hearn accidentally called the demon Catch by reading an incantation he found hidden in a silver candlestick at his seminary. The demon gives Travis protection and eternal youth, but it also kills and eats people whenever it gets a chance. Now, Catch has been bound to Travis for seventy years, and Travis has been trying to track down Amanda, the girl he left the candlesticks—and his heart—with.

Travis comes to Pine Cove, California, and finally finds the girl he has been searching for. Amanda is now a ninety-year-old grandmother, married to Effrom Elliot, but unfortunately she is out of town. Travis also meets Amanda's granddaughter, Jenny. Travis does not know Jenny is related to the girl he met so long ago, but he is immediately attracted to her.

Jenny, who works at Howard Phillips' cafe, has recently separated from her husband Robert, an alcoholic photographer whose photography business has gone nowhere. Robert has been staying with The Breeze, a forty-year-old eternal surfer who has been setting up the drug deal of his life. Unfortunately, The Breeze is eaten by Catch, blasting the drug deal—or rather, Detective Rivera's drug sting.

Meanwhile, the King of the Djinns, Gian Hen Gian, smells that Catch is nearby and recruits the owner of Pine Cove's general store, Augustus Brine, to track down Travis and Catch and send Catch back to hell. Catch, however, has his own plans. He recruits Rachel, the local pagan coven leader, to become his new master and kidnaps Effrom, Amanda, and Jenny to get what he needs.

Through a complex web of coincidence, Robert, Travis, Howard, Gian Hen Gian, and Augustus come together to rescue Effrom, Amanda, and Jenny and send Catch back to hell. Detective Rivera stumbles on the plot and nearly wrecks their plans. Then, Effrom dies of a heart attack during the rescue. Finally, Catch is sent back to hell, but Travis's unnatural youth leaves him. He becomes a ninety-year-old man. Augustus directs Gian Hen Gian to make Travis and Amanda age backwards, so the two ninety-year-old lovers who have found each other after so many years can live a whole life together. Then, he heads off to Nevada to found a brothel and give a little bit of pleasure to everyone who visits.

More summaries and resources for teaching or studying Practical Demonkeeping: A Comedy of Horrors.