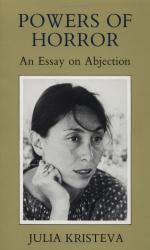 Powers of Horror: An Essay on Abjection Summary & Study Guide

Powers of Horror: An Essay on Abjection Summary & Study Guide includes comprehensive information and analysis to help you understand the book. This study guide contains the following sections:

This detailed literature summary also contains Topics for Discussion and a Free Quiz on Powers of Horror: An Essay on Abjection by Julia Kristeva.

Kristeva examines the notion of abjection—the repressed and literally unspeakable forces that linger inside a person's psyche—and traces the role the abject has played in the progression of history, especially in religion. She turns to the work of Louis-Ferdinand Celine as an almost ideal example of the cathartic, artistic expression of the abject.

Kristeva begins with what she calls a "phenomenological" investigation of the abject. This means that Kristeva uses her personal experience—and the expressed experiences of others—to get some idea of what the abject is. From that basis, she goes onto give it a more rigorous definition. The abject, in short, is a kind of non-object that lingers in a person's psyche, the consequence of repression. In order to understand why the abject is not an object, one must under the post-modernist theory of language that Kristeva subscribes to. Kristeva believes that the entire world, including one's self, is understood through language; it is the only lens, so to speak, by which we can understand anything. Now, one is not born speaking; rather, language is a gradual development during the course of one's childhood. Simultaneous with this linguistic development are several crises which Kristeva borrows largely from the psychoanalytic work of Sigmund Freud. Most important of these crises is the Oedipus complex, in which the child begins to lust for his mother but is unable to have her because of his father. Ultimately, he resigns himself to the fact that he will never have his mother and represses the desire for her. As this complex is largely pre-linguistic—or, at least, before linguistic abilities have fully developed—the lingering, repressed remnants of this lust continue to linger in the soul but they never gain the "substance" of expression.

Kristeva argues that the abject exerts a tremendous psychological impact on individuals and, indeed, on societies as a whole. Religion is a natural response to the abject, for if one truly experiences the abject, he is prone to engage in all manners of perverse and anti-social behaviors. Therefore, religion creates a buffer between one's mind and the abject and further represses them. Kristeva follows Freud in her belief that repressed desires tend to manifest themselves unconsciously and symbolically. This can happen occasionally in something like the slip of the tongue—the so-called "Freudian slip"—but it also happens in art. Indeed, art is indispensable to investigating the abject, because its non-linguistic nature prevents it from ever being directly expressed. Kristeva traces the influence of the abject, particularly the abject as related to mother-lust, in the development of Judaism and Christianity. She sees the strict Mosaic laws as reducing, fundamentally, to the incest taboo, the most basic (and obvious) response to one's repressed mother-lust. Christianity builds upon (but also contradicts) Judaism by identifying the abject almost directly—with the new, Christian concept of sin as something inside of oneself—but then strictly forbidding it. In the Christian world, one becomes more divided than ever.

The only refuge one has against the repression of religion and political bodies is art, and Kristeva finds Celine to be an abject author par excellence. His work is, intentionally, revolting. He describes in graphic detail the crudest and most vile aspects of human life in order to force the reader to consider those parts of his existence which he tries to escape, much like he tries to escape the horror of the abject. He perverts the traditional Oedipal triangle—child, mother, and father as one who desires, one who is desired, and an obstacle or law, respectively—by turning the mother either into something hateful and undesirable, by turning the child into the father (in a perverted episode of incest), or turning the mother into the father. All of Celine's work is focused on revealing the abject to the reader, not by describing the abject directly, but by destroying the structures with which the reader protects himself from it—his own psychology and language.

Kristeva concludes her essay by noting that the usefulness of studying the abject can be found in its immense political and religious influence over the centuries. The institutions which wield power in the modern world, which she believes to be oppressive and inhumane, are built upon the notion that man must be protected from the abject. By facing the abject face-to-face one tears away the support of these institutions and embarks on the first movement that can truly undermine them.

Powers of Horror: An Essay on Abjection from BookRags. (c)2022 BookRags, Inc. All rights reserved.