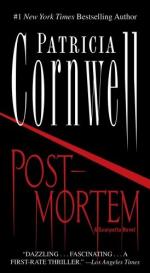 Patricia Cornwell
This Study Guide consists of approximately 46 pages of chapter summaries, quotes, character analysis, themes, and more - everything you need to sharpen your knowledge of Postmortem.

Marino arrives at Scarpetta's office carrying the morning newspaper. The cop is furious about the story relating to the new DNA link to the killer. Abby's name doesn't appear on the byline but they all know who wrote it. Also included in a sidebar next to the article is an explanation of DNA fingerprinting.

The popular consensus is that the killer has seen the article and hasn't shown up for work that day, afraid that someone will connect him to the body odor. Both Scarpetta and Wesley tell Marino that the story isn't the pressing issue at the moment but agree that perhaps the killer will make a mistake because of rage.

Later in the day, Kay calls Bill's office to find that he has gone out of town and will not be back until the beginning of July. Kay knows...

More summaries and resources for teaching or studying Postmortem.