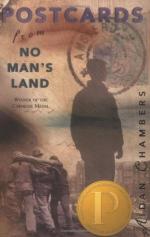 Aidan Chambers
This Study Guide consists of approximately 34 pages of chapter summaries, quotes, character analysis, themes, and more - everything you need to sharpen your knowledge of Postcards from No Man's Land.

Postcards from No Man's Land Summary & Study Guide includes comprehensive information and analysis to help you understand the book. This study guide contains the following sections:

This detailed literature summary also contains Topics for Discussion on Postcards from No Man's Land by Aidan Chambers.

Postcards from No Man's Land tells the story of World War Two's effect on three generations of a family and the secrets revealed when a long-lost grandson visits Amsterdam to discover the truth.

Jacob Todd travels to Amsterdam when a friend invites his grandmother, Sarah, who is too ill to attend. Rather than let the plane ticket go to waste, she sends her grandson in her stead. When Jacob arrives, he feels very unsure about his surroundings. He is prone to depression and suicidal thoughts, and being in Amsterdam has exacerbated these feelings. Jacob feels a strong connection to Anne Frank, even going so far as to say that he is in love with her, but when he visits her home, his negative feelings intensify. He has a strange encounter with a beautiful man - whom he initially thinks is a woman - before being mugged. Stranded in the city, Jacob has no choice but to stay with Daan, the son of the couple he had initially come to meet. Under Daan's guidance, Jacob thrives in the city, and a whole new world of experiences is opened up to him: he visits art museums, explores his family history, and engages in multiple romantic relationships. At the core of Jacob's travels, however, is visiting the woman who cared for his injured grandfather during the war. This woman, Geertrui, who is Daan's grandmother, is dying. She has scheduled a medical-assisted suicide and wants to tell her story to Jacob before she does.

In Geertrui's chapter's, the reader hears the story of World War Two through her teenaged perspective. She first met the British soldier Jacob Todd when he parachuted into her village to push back the German occupation. When he returned to her home a few weeks later, terribly injured, Geertrui hid him in her cellar and helped nurse him back to health. When their living situation becomes too dangerous, Geertrui and Jacob move into the home of Dirk Wesseling, Geertrui's fiancé. The German soldiers come very close to discovering the truth about Jacob - which would have put everyone in grave danger - but they manage to keep the hidden soldier safe. Over time, Geertrui and Jacob fall in love. When Dirk abandons the house to return to the army, Geertrui and Jacob's relationship becomes physical. Soon after Jacob is well enough to walk around, he dies from a massive heart attack, devastating Geertrui. A few months later, she discovers that she is pregnant with Jacob's child. Taking pity on her and with a heart still full of love, Dirk asks Geertrui to marry him, so long as she never tells anyone the truth about the child. Geertrui agrees.

The two stories merge when, on her death bed, Geertrui admits that her daughter, Daan's mother, was fathered by Jacob Todd, whose grandson and namesake has come to visit. The news shocks the entire family, but eventually brings them together as they prepare for Geertrui's death. The story ends with the younger Jacob Todd preparing to return to America. He struggles with weight of this new truth, wondering if he should tell his beloved grandmother, Sarah, what he has learned. As he departs, Jacob reevaluates what it means to love and what it means to be brave.

More summaries and resources for teaching or studying Postcards from No Man's Land.

Postcards from No Man's Land from BookRags. (c)2022 BookRags, Inc. All rights reserved.