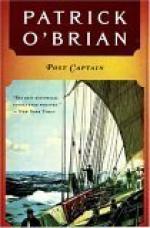 Patrick O'Brian
This Study Guide consists of approximately 48 pages of chapter summaries, quotes, character analysis, themes, and more - everything you need to sharpen your knowledge of Post Captain.

Would you rather be a seaman aboard H.M.S. Polychrest or H.M.S. Lively? Why?

Do you consider Jack Aubrey to be the epitome of what a Royal Navy captain should embody? Why or why not?

Contrast the way Sophie Williams treats Aubrey to the way Diana Villiers treats Maturin. Should Maturin have been genuinely surprised by Diana's association with Richard Canning?

Maturin makes fairly liberal use of opiates to sleep. Discuss the elements of Maturin's character which might indicate a desire for a secret reliance on drugs.

The narrative descriptions of Diana and Sophie contain many similar elements. In general, Diana is characterized as more beautiful and far more sensual than Sophie. Contrast the two women. Which character do you find more sympathetic? Does the novel treat women characters fairly?

Aubrey seems to be a master of the sea but quickly...