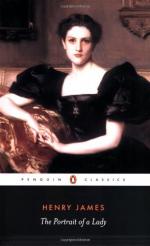 Henry James Writing Styles in The Portrait of a Lady

Henry James
This Study Guide consists of approximately 37 pages of chapter summaries, quotes, character analysis, themes, and more - everything you need to sharpen your knowledge of The Portrait of a Lady.

James is considered the foremost author of psychological realism, a subcategory of American realism.

The Realist period in American literature followed Romanticism, a movement that produced stories of idealized love and that elevated emotion above reason. The harsh realities of the Civil War suddenly made Romanticism irrelevant. The year of the war's end, 1865, marks the end of the Romantic period and the beginning of American realism.

Realism got its name from the fact that its stories depicted realistic characters in believable, lifelike situations. Heroes and heroines were not larger than life; they were often "just plain folks" that readers could identify with. And these characters faced problems similar to those that real people facedneither melodramatic and overblown nor magically solved by some unexpected and incredible twist of the plot. These stories were told in straightforward, objective prose that sought to engage readers' minds more than their...

More summaries and resources for teaching or studying The Portrait of a Lady.

The Portrait of a Lady from Gale. ©2005-2006 Thomson Gale, a part of the Thomson Corporation. All rights reserved.