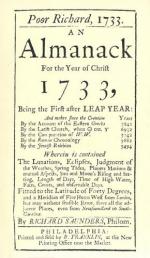 Benjamin Franklin
This Study Guide consists of approximately 20 pages of chapter summaries, quotes, character analysis, themes, and more - everything you need to sharpen your knowledge of Poor Richard's Almanack.

Franklin is the creator, complier and publisher of "Poor Richard's Amanack." At one point in his life, he even published a newspaper. Like the almanac, Franklin wrote articles for his paper under pen names. However, it is not for his almanac or even his newspaper writing and publishing that he is best known. Franklin is perhaps best known as one of the founding fathers of the United States of America. He assisted in drafting the Declaration of Independence. One of the signatures on the Declaration of Independence belongs to Benjamin Franklin.

Franklin is also known for his many inventions. During his lifetime, he invented many things, including the lightning rod, bifocals, a musical instrument called the Glass Armonica, swim fins and a efficient heating stove. Franklin is also well-known for his experiments with electricity, particularly his kite experiment.

Franklin was also very dedicated to public service and...