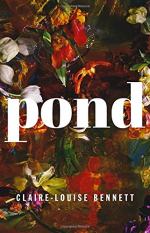 Bennet provides readers with yet another free verse poem similar to the one included in “Voyage in the Dark,” revealing a writing...