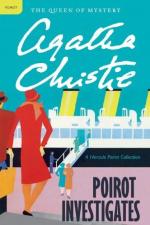 This detailed literature summary also contains Topics for Discussion and a Free Quiz on Poirot Investigates by Agatha Christie.

Captain Hastings, Poirot's friend, notices a woman on the street when looking through the window of Poirot's room. Poirot identifies her to be Miss Mary Marvell, a famous American film star. He suspects she is on the way to see him. Soon his predictions are confirmed, and the door bell rings. Mary Marvell brings threatening letters she received in relation to the diamond in her possession called the "Western Star."

This the first of the 11 adventures of Hercule Poirot, a Belgian detective who investigates crimes and unravels mysteries that pose danger to his clients. Along with him the Scotland Yard is also chasing these villains always coming second. Each crime involves high society circles, including political figures. Although less able, Captain Hastings provides assistance that can be vital even when his conclusions seem to go astray. His input in the form of observation or remark can spark a new perspective, and Poirot appreciates it. Captain Hastings follows all the cases not realizing that Poirot knows more than he reveals, only to find out that all his actions were methodically planned and executed. At the end of each adventure, Poirot explains how he arrived at his conclusions.

The first chapter and the first robbery involves the famous diamond "Western Star" and its copy. Gregory Rolf, a famous American actor has an affair with Lady Yardly, on her visit from the UK. He then blackmails her to give him the diamond, which he then gives to his wife while Lady Yardly keeps the copy. Lord Yardly wants to sell the false substituted copy, but such transaction would expose the fraud. Gregory Rolf invents a story that there are two diamonds wanted by a Chinese man, who is to steal them and return them where they belong. He then attempts to steal his own copy when Poirot discovers everything and convinces him to return the diamond to the Yardlys.

The second crime involves a businessman, who allegedly committed suicide after insuring his life for the benefit of his young wife. She executed the murder by asking him to reenact the story of one man's suicide and then pulling the trigger. This act was inspired by a story told by her friend, Captain Black, involving an African farmer, who killed himself by putting the gun into his mouth.

In the third chapter and the third adventure Captain Hastings finds out from Mrs. Robinson about an unusually cheap apartment she has just rented. When he relates it to Poirot, he suspects crime. The Robinsons have the same name as two international spies, who try to escape the revenge of the mafia. When they find a couple with the same surname and similar appearance they rent out their apartment to them to mislead their avenger, but Poirot prevents the revenger from revealing their true identity. The spies are also wanted by the American Government for the Naval Plans that are in their possession.

The fourth chapter involves Captain Hastings investigating the crime committed by Mr. and Mrs. Havering, who killed their uncle, Mr. Harrington Pace, in Hunter's Lodge. Mrs. Zoe Havering, previously an actress shot Mr. Pace with one of the two pistols in the room where he allegedly received a guest. She disguises herself as her own maid, making her testimony more believable, claiming that she has never seen the guest. Poirot realizes there has never been a maid. The murderers manage to get away with the crime but not for long.

The fifth chapter deals with the stealing of Liberty Bonds worth one million dollars when carried on board the ship Olympia traveling to New York. Philip Ridgeway was in charge of taking them to New York, and he is now under suspicion. As the bonds were sold even before Olympia arrived, Poirot knows that they must have reached New York on a different ship, and in fact were stolen before Mr Ridgeway boarded the ship.

In the sixth chapter Poirot doesn't hesitate to travel to Egypt to pursue crimes committed by a doctor, who uses superstitious beliefs to cover his killings. His friend, who has a rich uncle, leaves him a will, not expecting to inherit his uncle's fortune when he dies of blood poisoning.

In the seventh chapter, when Poirot and Hastings are on holiday, they become involved in a theft investigation in the Magnificent Hotel. They meet Mr and Mrs Opalsen, whose necklace is stolen. The chambermaid steals the necklace when their French maid leaves the room for a few minutes. She hands the necklace to the valet waiting in the adjacent room. Both the chambermaid and the valet are experienced thieves, who place the false copy of the necklace into the French maid's bed. Poirot's attention to detail allows him to discover who really stole the necklace.

In the eighth adventure and the most significant of Poirot's achievement he rescues the kidnapped Prime Minister. During the peace conference the Prime Minister is kidnapped in order to influence the result of the conference. He is impersonated while his car is substituted to mislead Scotland Yard and the French police searching for him in France. He is kidnapped before he reaches France, but only Poirot realizes it.

In the ninth chapter Mr Davenheim, a rich banker disappears. A few days later his bank goes bankrupt. He stages his own robbery and disappearance. Only inspector Poirot traces him where no one expects him to be - in prison.

The tenth chapter deals with Count Foscatini, who successfully blackmails his fellow countrymen. The details of his last blackmail are overheard by his servant, who decides to stage a murder. He arranges for a dinner that never takes place and guests that never arrive, shifting the time of the murder to the time of the visit. Poirot's analytical mind sees through the plot.

The eleventh and the most pleasant task involves finding a hidden will. Miss Violet Marsh angered her uncle when refusing to abandon her educational pursuits. He decided to punish her by hiding his will. The only way she can inherit his fortune is if she finds it. She manages to achieve that with the help of the Belgian detective.