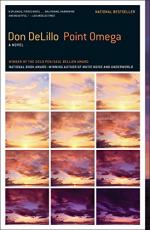 This detailed literature summary also contains Quotes and a Free Quiz on Point Omega by .

The following version of this book was used to create the guide: DeLillo, Don. Point Omega. Scribner, 2010.

The novel opens with a prologue entitled “Anonymity,” set in early September 2006. It details a man’s experience in the 24 Hour Psycho exhibit at the Museum of Modern Art in New York City. The exhibit showcases Alfred Hitchcock’s film Psycho in super slow motion over the course of 24 hours. The unnamed man stands at the back of the room, observing others as well as the film itself, which he has seen several times since its installation. He draws various philosophical conclusions about the exhibit, watching the screen from different angles, and wishes a woman would join him, so he would have someone with whom he could share the experience.

The novel then shifts to a first person narrative told by Jim Elster, a filmmaker from New York (and the man from the prologue), who has joined retired scholar and Pentagon adviser, Richard Elster, at his home in the desert to discuss the possibility of a film collaboration. Elster would be the subject of a documentary about the Iraq War: a minimalistic, experimental commentary on the war in all its complexity. They begin, however, by discussing the nature of time and mortality on the deck, watching the desert landscape. Elster has moved from New York to the desert to contemplate time, to let the pace of his life slow to a crawl, and to absorb as much of the natural world as he can.

In the next chapter, Elster’s daughter, Jessie, joins them. Also from New York, Jessie is quiet, reserved, and somewhat cold towards Jim, who develops an immediate attraction to her. They discuss various topics: Jim’s previous film efforts, the 24 Hour Psycho exhibit, Elster’s tendency to lecture—without ever quite finding common ground. Jim studies Jessie from a distance, clearly interested yet unable to make a move.

In Chapter Three, Jessie and Jim connect: first with a conversation about an elderly husband and wife who Jessie helped in New York, then with a touch of the hand, which Elster interrupts, driving Jessie away. She seems both indifferent to and amused by Jim’s awkward advances. The next day, when Jim and Elster return from a grocery trip to town, Jessie is gone. They search the surrounding area, then call the police.

Two days pass, and Jessie is still missing. There is no evidence of a struggle; however, they learn from Jessie’s mother that she had gone to the desert to get away from a boyfriend who had been bothering her. Jim immediately suspects this man (possibly named Dennis), especially when the police discover a knife in the desert miles from the house. Nothing is definitively proven, however, and eventually Elster and Jim give up on the search and return to the city. Elster is understandably heartbroken; Jim is mostly just stunned.

The epilogue takes place a day after the prologue, on September 4th. He is at the 24 Hour Psycho exhibit again, watching a different portion of the film. Eventually, a woman joins Jim in the exhibit, and they strike up a conversation. Jim manages to get her number but wonders whether he will ever see her again. He stays in the exhibit after she leaves, drawing new conclusions about the images on-screen.