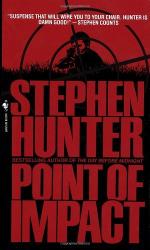 This detailed literature summary also contains Topics for Discussion on Point of Impact by Stephen Hunter.

The story opens with Bob Lee Swagger sitting uncomfortably in the sleet at exactly the point where he will encounter a trophy buck called "Tim" by the locals. He waits for hours, refuses to allow his teeth to chatter, and makes the perfect shot when the monster buck appears. The buck falls and Bob watches the downed animal, noting the fear and betrayal in its eyes, then cuts the antlers off and stands back, now certain that the buck won't be taken merely as a trophy.

Bob is a former U.S. Marine sniper and one of the best shots there is. He now refuses to kill anything and is retired, having been shot in the hip by a sniper in Vietnam. That sniper killed Bob's spotter and best friend, Donny Fenn. Bob lives alone with little contact with the outside world. Then comes the day when a man named Colonel Ray Shreck approaches Bob, gives a fake name and government affiliation, and says the sniper who shot Bob, is now planning to assassinate the United States President. In truth, the assassin is a bitter paraplegic named Lon Scott. Bob's role is to act as the scout, find the best possible vantage point for the assassination because Lon, confined to a wheelchair, can't do his own on-the-ground research. Bob does so, thinking he's helping save a life and capture the man who killed Donny.

When Bob sees the assassin, just as he'd predicted, he's unable to intervene and those he thought were trying to prevent the murder of the president do nothing. Instead of the president, a Salvadoran archbishop is shot and the general feeling is that the shooter simply missed the target. Bob himself is shot and immediately realizes that he has been framed. He manages to escape, encounters an FBI agent named Nick Memphis - a former sniper himself. Bob escapes Nick as well and it's Nick who soon doubts Bob's guilt. When Bob saves Nick's life, the two begin a quest to find the guilty and prove Bob's innocence. With proof in hand and the driving forces behind the assassination plot dead and Bob's newfound love safe, Bob refuses to hand over the documentation, knowing the graphic murder of men, women and children will be aired by the media. His honor refuses to let that happen and he decides instead to allow the justice system to do its work. His attorney, the elderly, country but competent Sam Vincent, soon demonstrates that the rifle Bob reportedly used in the assassination had been altered by Bob - who sensed a trap - and was incapable of firing. The case is dismissed with a judge's warning to get to the true facts of the case.

The facts are that RamDyne, an American agency used by CIA and FBI to do the "dirty work," had participated in a massacre of hundreds in Salvador as an incentive to guerrilla fighters to join peace talks. The Salvadoran archbishop who was assassinated had pledged to look into allegations related to the incident and the RamDyne officials felt the archbishop simply had to be eliminated.