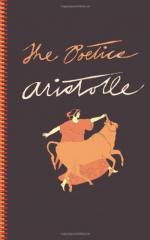 Aristotle
This Study Guide consists of approximately 21 pages of chapter summaries, quotes, character analysis, themes, and more - everything you need to sharpen your knowledge of Poetics.

This detailed literature summary also contains Topics for Discussion and a Free Quiz on Poetics by Aristotle.

The Poetics purports to be systematic analysis of the various types of poetry. In fact, however, the majority of the work is dedicated to studying tragic poetry, the highest form, and briefly discusses epic poetry. The analysis begins by distinguishing poetry from other forms of art: Unlike music, poetry uses only language; unlike prose, poetry uses text in rhythm. With poetry defined, it is necessary to know its purpose. Poetry is naturally attractive to men because it resonates with human nature; above all, poetry is a reflection on human action, and therefore is useful in learning, which is man's chief and highest instinct. Since poetry is spawned of human nature, it is not surprising that the various types of poetry spring from different types of humans. Comedies, for example, come from the souls of men who are less inspired and learned; tragedy, on the other hand, comes from men with noble souls who truly contemplate human existence.

There are very specific conventions that must be followed in the construction of a tragic poetry, and many of these recommendations apply to any narrative poem. The poem, for example, must have a well-constructed beginning, middle, and end, each fulfilling its proper role. Moreover, there must be a unity to the plot, such that a single action (however complex and convoluted) is depicted and the poet must make sure to leave nothing out which is essential to understanding that action nor include anything which is superfluous. Further, in the case of tragic poetry, the author must be sure to pick an action which inspires the emotions of either fear or pity, and the action depicted must be one which is intrinsically worthy of being in a poem. If a trivial, meaningless action is depicted, the poem, too, will lack substance. Further, while many tragedies are performed for audiences, and as such can take advantage of special effects on stage to impress those watching, a truly well-crafted poem will have no need for such things: The full effect of the poem should be able to be gleaned from merely reading it. Often, bad poets will mask their inferior product with garish productions on stage. Now the plot of any tragedy consists chiefly of two parts: the complication and the unraveling. In other words, in any tragedy a problematic situation is first created or depicted and then some resolution (whether good or bad) is achieved. In addition to ending well or poorly, the unraveling can also involve ignorance on the part of one of the characters—for example, a character may be about to kill a person without knowing that it is really their son—which is dispelled before the action takes place. Such an ending is the best kind of ending to a tragedy.

Unlike tragic poetry, epic poetry takes place on a very large scale and generally tells stories of much greater magnitude. While a tragic poem may focus on some political struggle within some wealthy family, an epic poem might give an account of an entire war (or at least certain parts of it). Nonetheless, many of the same restraints which apply to tragedy apply equally to epic poetry. For example, epic poetry, its large scale notwithstanding, still should focus only on a single action. Finally, any discussion of poetry should conclude with an evaluation of the different kinds of poetry. It would be easy to think that tragic poetry is lower than epic poetry, since tragic poetry is often performed for crude and uneducated audiences, but, this is not intrinsic to tragic poetry. Indeed, as was already stated, tragic poetry ought to be able to stand on its own as text and a performance should not, strictly, be necessary to appreciate it. Moreover, tragic poetry can treat of the same subjects—or, at least, of subjects with the same substance—as epic poetry and, since it does the same thing much more briefly, ought to be considered the higher art.

More summaries and resources for teaching or studying Poetics.