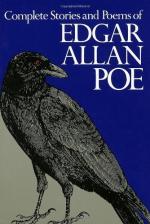 Edgar Allan Poe
This Study Guide consists of approximately 9 pages of chapter summaries, quotes, character analysis, themes, and more - everything you need to sharpen your knowledge of Poems of Edgar Allan Poe.

In this poem, the narrator laments the death of his young bride, Annabel Lee. He claims that their love was such a great love that even the angels were jealous, and this is why they have taken her from him. He claims that even death cannot sever their love, and that he has spent many nights next to her tomb by the sea.

This poem, published two years after the death of Poe's wife Virginia, is a melancholy poem of remembrance and sadness. The narrator, which in this case probably is Poe, feels that his love was too strong and too true to be allowed to survive and so, was thwarted in its prime by nothing less than angels. Some critics have delved a little too deeply into the last few lines:

More summaries and resources for teaching or studying Poems of Edgar Allan Poe.