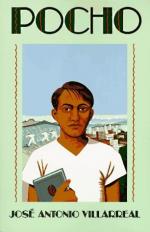 Jose Antonio Villarreal
This Study Guide consists of approximately 30 pages of chapter summaries, quotes, character analysis, themes, and more - everything you need to sharpen your knowledge of Pocho.

Pocho is the story of a Mexican family who moves to southern California in the 1930's. Their son, Richard, is a "pocho," the child of immigrants, growing up surrounded by American culture. American values do not always go along with the Rubio family's traditional Mexican culture, and they have some trouble adjusting to their new way of life. Richard is an intelligent, independent boy who wants to make a life for his own, but his parents very much want him to continue their traditional Mexican lifestyle instead.

At the beginning of the book, Juan Rubio is a soldier traveling around Mexico after fighting in several revolutions. After carelessly killing a man, Juan flees several miles north to the U.S.A., just past the border. Soon Juan's wife, Consuelo, and his daughters join him in America, and the family moves to California. One night, Consuelo gives birth to Richard, the only boy of many sisters. Both parents openly admit that Richard is their favorite child. Juan decides to settle down and be a proper husband and father to his family. Juan's influence in the community grows, and he becomes the leader of the Mexican community, helping newcomers find jobs, food, and shelter.

Richard is an extremely intelligent, inquisitive child. He gets in trouble for asking questions about Catholic dogma, which worries his mother. As time goes by, Richard's faith weakens, and eventually he stops going to church altogether. Various groups try to recruit Richard because it will be good for him as a Mexican. In fact, he really wants to go to college and become a writer. One day Richard's mother has a talk with him, and she tells him that he will probably have to drop out of school in a few years so that he can help support the family. When Richard is a small child, a little girl named Zelda bullies the entire neighborhood. When the children are young teenagers, the boys dare Zelda to have sex with all of them, unless she is chicken. She reluctantly agrees. Eventually, Zelda and Richard start secretly dating.

Although Juan always wants to go back to Mexico, Richard continues to be assimilated into American culture. Richard hangs around for a while with a group of pachucos, Mexican immigrants who reject both Mexican and American cultures. Richard is dissatisfied with his parents' plans for his life and wants to do something greater than marry and have children. Consuelo also has to adjust to an American way of life. She is tired of always being a submissive, quiet wife, acting as a servant to her family. There are many fights in the family, and finally Juan decides to move out. He tells Richard to go ahead and become a writer, if that is what he wants. Richard has more and more responsibility, as the man of the house. He decides that the only way for him to get out of his situation is to enlist to fight in World War II.

More summaries and resources for teaching or studying Pocho.