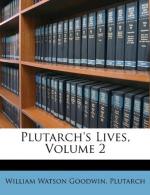 This detailed literature summary also contains Topics for Discussion and a Free Quiz on Plutarch's Lives, Volume 2 by Plutarch.

"Plutarch's Lives Volume II" is the second part of a collection of biographies of well-known figures from ancient Greece, Rome, Macedonia, Sparta, Persia, and Egypt. In this volume are included Plutarch's depictions of Sertorius, Eumenes, Agesilaus, Pompey, Alexander, Caesar, Phocion, Cato the Younger, Agis, Cleomenes, Tiberius Gracchus, Caius Gracchus, Demosthenes, Cicero, Demetrius, Antony, Dion, Marcus Brutus, Aratus, Artaxerxes, Galba, and Otho. Working from various sources and writing in the second century A.D., Plutarch produces character sketches of each of these great leaders based on episodes from their lives. He describes not only the grand exploits of his subjects, but also passes on stories of their private behavior he believes best illustrate their personal character and motivations.

Also included are shorter pieces in which Plutarch compares the characters of men to one another, such as Sertorius with Eumenes, Pompey with Agesilaus, Tiberius and Caius Gracchus with Agis and Cleomenes, Demetrius with Anthony, and Dion with Brutus. These pairings are arbitrary, Plutarch admits, based loosely on similarities between the lives of the men being compared. However they provide contrasts upon which Plutarch bases his observations on the proper virtues of a good leader. In choosing men to compare to one another, Plutarch, who was himself a Greek living under Roman rule, always pairs a Roman figure with a Greek or Spartan one.

Of particular interest to Plutarch is the manner in which each leader died, the nature of his death providing a final judgment of the nobility of his life. Not all of his great subjects died noble deaths, according to Plutarch. Dying victoriously is not required to die nobly, as several of the men that he profiles die in defeat and are perhaps even nobler for it.

Plutarch's lives are not biographies in the modern sense. Plutarch acknowledges that historical accuracy cannot always be determined surrounding his subjects and he sometimes includes asides where he weighs competing versions of a story and expresses his own opinion on what happened. He begins most of the lives with a brief discourse on the overarching themes of his subject's life, suggesting the lessons that might be drawn from it. His lives are not meant merely to chronicle events, but to instruct in virtue as well.

These virtues include fidelity to one's friends, graciousness to one's enemies in defeat, and devotion to principle over personal gain. Plutarch suggests that good leaders balance ambition with moderation and a spirit of service to their people. They are brave, but not rash, and they welcome an honorable death. They should seek to serve their subjects, but not merely be their servants. No one figure among Plutarch's subjects embodies all these virtues, however from reading them together and following Plutarch's comparisons among them, the image of greatness emerges.