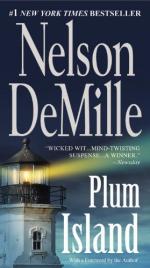 This is where most of the plot is centered for the novel, as this is the location for John Corey's convalescence from his wounds. The Township of Southold is one hundred miles from New York City and consists of eight hamlets and one village named Greenport, located in Suffolk County. North Fork is the area of Long Island where this story is placed, and is described as looking like Cape Cod. Year round the population is approximately twenty thousand people, but the number swells during the summer with tourists.

This is an 1890s Victorian farmhouse, on the Great Peconic Bay, with a wrap around porch, painted cream with green roof and trim. Uncle Harry is John's uncle, recently widowed, who loans the house to John for his recovery. Uncle Harry and Aunt June hosted the Corey family at the house for many...