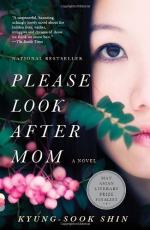 Shin Kyung-sook
This Study Guide consists of approximately 41 pages of chapter summaries, quotes, character analysis, themes, and more - everything you need to sharpen your knowledge of Please Look After Mom.

This novel, translated into English from the original Korean, explores how individual members of a family are traumatized by the sudden and unexplained disappearance of "Mom." As the narrative explores the loss, self-recrimination, and in some cases, self-discovery experienced in the aftermath of Mom's disappearance, it also considers themes related to the self-sacrifice of mothers, the relationship between past and present, and the shifting nature of identity.

The first part of the story, "Nobody Knows,", is written from the first-person perspective of Mom's eldest daughter, whose name is not revealed until the novel's second section. Her narration describes the family's attempts at finding Mom who got separated from her husband, Father, while they were hurrying through Seoul's busy train station, contemplating the various unusual circumstances that might have brought Mom and Father to the station at that particular time. The narrator also contemplates the narrator's relationships with Mom and also with the narrator's younger brother, the over-achieving and much resented Hyong-Chol, to whom Mom devoted much of her time and energy.

The novel's second section, "I'm Sorry, Hyong-chol" is narrated from the third-person perspective of Hyong-chol himself who wonders what he was doing at the moment Mom disappeared, worries about how to find her, and begins to feel guilty about not being a better son. As Hyong-chol and Chi-hon follow every possible lead as they try to track Mom down, they discover that she is following something of a pattern, visiting every place where Hyong-chol lived, or worked, or both. Over the course of the searches, Hyong-chol remembers how Mom pushed him to do well on his exams, how disappointed she was when he failed the entrance exam to university, how she continued to make sacrifices for him, and ultimately, how badly he treated her.

The third section of the novel, "I'm Home" is narrated from a similar perspective to that of the first section - that is, of a first person narrator speaking of himself in the third person (i.e. referring to himself as "you"). In this case the narrator is Father, struggling to come to grips with the disappearance of his wife, with his memories of her life, with his self-recrimination for not being a better husband, and with the surprising discovery of her relationship with a local orphanage. Meanwhile, the mystery of what happened to Mom is deepening, although both Hyong-chol and Chi-hon are beginning to wonder whether they're ever going to find her.

In the fourth section of the novel, "Another Woman", the narrator is Mom herself. In language and phrasing that suggests she has died, or at least that she is existing on a different spiritual plane, Mom describes visiting her favored younger daughter (and worrying that she, the daughter, is losing her sense of self) and a male friend (who was a confidante and perhaps more). She also visits her and Father's home and, when she discovers that Father isn't there, explores the house room by room, reliving important times in her life. At the close of this section, narration describes Mom's encounter with her own Mom, and the comfort she finds in her arms.

The narrative closes with an epilogue, written in the same narrative style as the first and third sections and again focusing on Chi-hon, who has impulsively joined her boyfriend on a trip to Rome. Leaving him behind in their hotel room, she walks through the ancient streets, at one point reading a letter sent by her sister in which the sister describes changes in her feelings and perspectives since Mom disappeared. Later, Chi-hon visits the Vatican where she is able to honor one of Mom's fondest wishes and where later she whispers a prayer to the Virgin Mary to "please, look after Mom."

More summaries and resources for teaching or studying Please Look After Mom.