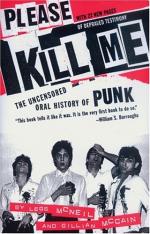 Please Kill Me: The Uncensored Oral History of Punk Summary & Study Guide includes comprehensive information and analysis to help you understand the book. This study guide contains the following sections:

This detailed literature summary also contains Topics for Discussion on Please Kill Me: The Uncensored Oral History of Punk by Gillian McCain and Legs McNeil.

"Please Kill Me: The Uncensored Oral History of Punk" by Legs McNeil and Gillian McCain is a collection of firsthand accounts of the history of the punk music scene.

The book begins by focusing on the two front running bands in the punk music scene: New York City's Velvet Underground and Detroit, Michigan's Motor City Five. The book goes on to include early associations with Andy Warhol and poet Patti Smith, as well as the rise of bands like the New York Dolls and The Stooges. The book also goes into detail about the deviant lifestyle of all the band members and affiliates of the punk music scene, ranging from sexual promiscuity to binge drinking to heavy drug use.

The book chronicles the rise of other bands, such as the Ramones and England's Sex Pistols, as well as the conservative cultural backlash against the excesses of the 1960s and 1970s-punk music culture. In fact, many of the band members and people associated with the punk music scene succumb to their own vices by way of drug overdoses and health issues resulting from drug use and drinking. Through the 1990s, the punk music scene peters out, while many believe that the death knell for punk music sounded in the 1980s.