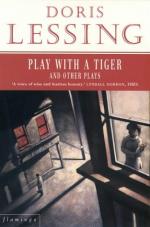 Books Like Play with a Tiger by Doris Lessing | Suggested Reading

Doris Lessing
This Study Guide consists of approximately 38 pages of chapter summaries, quotes, character analysis, themes, and more - everything you need to sharpen your knowledge of Play with a Tiger.

The Grass Is Singing (1950) is Lessing's first novel. It is about a young person growing to maturity. It takes place in Lessing's childhood home, Rhodesia (later renamed Zimbabwe).

Bessie Head, a Black novelist born in the Republic of South Africa and forced to flee to Botswana for her anti-apartheid political activities, published When the Rain Clouds Gather in 1968.

Burger's Daughter (1979), by South African author Nadine Gordimer, is about a young white woman whose parents are political activists working to end the system of apartheid, which institutionalized the under-class status of the nation's African peoples.

Lessing's The Marriages between Zones Three, Four, and Five (1980) is the second novel in her "space fiction" series Canopus...

More summaries and resources for teaching or studying Play with a Tiger.

Play with a Tiger from Gale. ©2005-2006 Thomson Gale, a part of the Thomson Corporation. All rights reserved.